Beta
Partial Ignition: Dionysos (디오니소스, Dionisoseu) is an ability of Beta as Living Ignition Weapon to perform a partial ignition on any part of his body that he can use for his advantages in a fight or combat situation.[1][2][3] 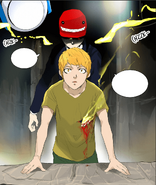 Use Dionysos to increase his speed

Use Dionysos to strengthen his kick 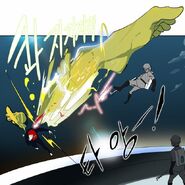 Use Dionysos Arm to attack White