Dinn (더딘, "Deodin") is a Regular that participated in the Workshop Battle and won the 15th round of the event "Plug Battle" along with Rak Wraithraiser who disguised himself with a hawk beak mask to avoid FUG surveillance of him being the old friend of Viole.[1]

While disguised, he participated in the same round of the Plug event as Rak, with both of them emerging victorious. 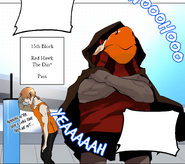 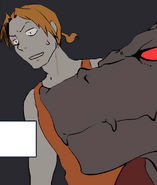 Deodin participated in the Workshop Battle and won the 15th round of the event "Plug Battle" along with Rak Wraithraiser. He also watch the fight of Khun Ran VS Anak Zahard.

Although he appeared to be an ordinary man with ordinary ability, he can still pass and win the 15th round of the Plug Battle event. This means that he is strong between the weak E-Rank regular.

Retrieved from "https://towerofgod.fandom.com/wiki/Dinn?oldid=118204"
Community content is available under CC-BY-SA unless otherwise noted.