Chung (청, Cheong) is a Big Breeder who uses an avatar to manage over the 1st Stage - Town of the Wandering Minstrel in the Hidden Floor.[1] His physical body resides in the Hidden Hidden floor.[2] This job was given to him directly by the data version of younger Zahard.[3]

Chung as his big breeder avatar are very ruthless and wicked. He will use many dirty tricks necessary to gain what he want. He is arrogant and over-proud because Data Zahard entrusted him power and position as big breeder. However, Chung's real self is actually a coward because he seems very weak. 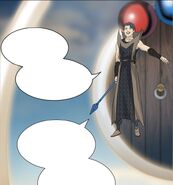 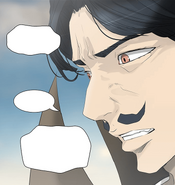 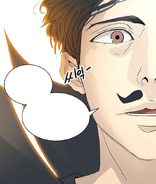 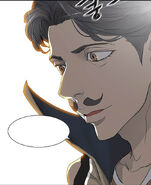 In his big breeder avatar, Chung wields a blue coloured short spear with an arrow-like point that can shoot beams and waves of black coloured energy that absorb the shinsoo of an attack. It even blocked Baam's Shinshu Black Hole Sphere, to his astonishment.[4]

Retrieved from "https://towerofgod.fandom.com/wiki/Chung?oldid=124473"
Community content is available under CC-BY-SA unless otherwise noted.