Tower of God Wiki
Register
Don't have an account?
Sign In
Advertisement
in: Characters, Females, Rankers,
and 6 more
English

Cha Tanoa (챠 타노아, Chya Tanoa) was a Ranker and a 3rd Class Servant in the 1st Division of the 4th Army Corp in Zahard's Army.[1]

Tanoa has feline features, with purple hair, big ears, a black animal nose, and sharp teeth. She wears an eye mask with an elaborate symbol, along with a white robe. 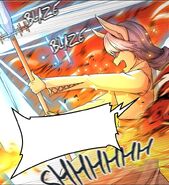 Cha Tanoa arrived at the Last Station together with the 1st Division and vice Commander of 4th Army Corp. She was ordered to support her superiors, Ari Bright Sharon and Elpathion in their attack against Evankhell. When Evankhell used her Orb technique - Wailing Flames, Cha Tanoa tried to block it, but she was burned to death.

Cha Tanoa was a Wave Controller, but her skills were no match against a High Ranker at Evankhell's level.[2]