Cha (차, Cha) is a war hero who sealed himself within the Wall of Peaceful Coexistence in order to be closer to Dowon. He is the leader of the Hidden Grove team and a descendant of "the first man".[1]

He has tan skin with black hair and eyes. His ears a slightly pointed and he has a tattoo/mark on his right cheek in the form of a black windmill. 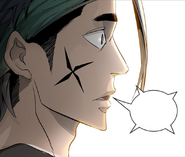 Cha surprised by Dowon accurately guessing his feelings for her. 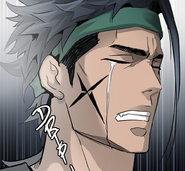 Cha crying because Dowon will be sealed.

Cha rampaging and killing several allies of Zahard.
Add a photo to this gallery

Following the war history of FUG against the Zahard Empire, at some point, like Dowon, Cha also seems to be one of the many outstanding Rankers from many countries who opposed Zahard to become king of the tower. He probably receive a special training under the masters at FUG as well. After all of these outstanding rankers completed their training, they will be assigned in their respective special teams. Cha was assigned as the leader of Hidden Grove team, along with Dowon, Khun Hynd Luch, Taro York, Toro and three other unnamed member. During the war, the Hidden Grove team quickly gained popularity as one of the best teams that emerged during the war after they successfully killed direct descendants of the 10 Great Families.[2]

Three Months before Dowon was sealed, the Hidden Grove team members (Dowon, Khun Luch and Taro York) was being chased by the Ancient Odd-Eyed Giant Cobra, one of the 23 special beasts of Lo Po Bia Family which was controlled by the 8th son of the Lo Po Bia Family Head. Dowon managed to slow down the giant cobra with her Flower Garden skill, before Cha finally came to their aid along with Toro and one other member.

The 8th son then revealed his real intention in front of all members of the Hidden Grove team that were present at the time, stated that he was sent to deliver a special message to Dowon that she had to surrender to be sealed at the Wall of Peaceful Coexistence. After hearing the message, all of them decided to end the fight with the snake and returns to their team's warship. In the meeting room, all members of the Hidden Grove team are gathered to hear Dowon's opinion, all of them are present, except Cha. But it turns out Cha waited on the outside of the meeting room. In a teary good bye with Dowon, Cha finally confessed his hidden love feelings for Dowon, by asking if he could ask her out after she got unsealed.[3] After Dowon was sealed, Cha was deeply saddened. He left the team and went to go on a rampage, killing several allies of the Zahard Empire before requesting to be sealed himself.[1]

After he becomes unsealed, he saw Toro died in front of him. Later, Cha interrupts the fight between the 5th Army Corp and the Canines with an energy blast. Cha remembers before he was sealed away that a man told him to sealed himself away in order to see Dowon again. The man also told Cha he would see a special boy from a noble bloodline.

He is not seen wielding a weapon even when facing a legendary beast from the Lo Po Bia Family, which would suggest that he fights with his fists.[1]

Retrieved from "https://towerofgod.fandom.com/wiki/Cha?oldid=124807"
Community content is available under CC-BY-SA unless otherwise noted.