2F - Epilogue - Rachel (2): This is the seventy-sixth chapter of Volume 1 of Tower of God. It follows Rachel, as we see her side of the Ball Test, where she refuses to do it and have to watch Baam do the same test.

Hwa Ryun asks Rachel how she feels after walking this path on which she has condemned Baam to the cold depths of the Floor of Test, to what she replies that she is just a little tired.

We are treated to a flashback of Rachel entering the Tower and meeting Headon afterwards. Headon insults her and tells her that she's not the one chosen by the Tower but, answering her pleas, he offers her the same test that Baam took which she, fearing for her life, refuses to take. From Rachel's perspective, as she hides in a dark corner, the readers can once again watch Baam arrive and take the test while she screams at him not to, much to Headon's amusement. 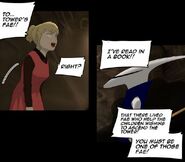 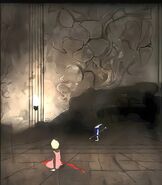 If you can't remember it, you may want to refer to the first chapter.

This chapter would be better when you compare it to Chapter 1 as you read.
You may notice something like Rachel's eyes in Chapter 1…


If Baam is a 'typical heroic person.
Rachel would be 'typical normal person.
In Volume 1 Baam thinks he is following behind Rachel,
But in reality, she does not get far and gets caught up by him.
And becomes put behind.
I think most people are like this.
So I wanted to make a somewhat awkward situation where people would be angry at Rachel yet feel more related to Rachel than Baam.


But it is true my skills are not enough to make such an emotional scene.
It was hard.


Flashback continues until next week.
Thank you.

Retrieved from "https://towerofgod.fandom.com/wiki/Ch.76:_2F_-_Epilogue_-_Rachel_(2)?oldid=148963"
Community content is available under CC-BY-SA unless otherwise noted.