2F - Epilogue Rachel (1): This is the seventy-fifth chapter of Volume 1 of Tower of God. It follows the conclusion to the Submerged Fish Hunt Test, with Rachel claiming Baam died to protect her from the Bull, but despite Baam's disappearance the rest of the Regulars still passed the test.

Rak, Hong Chunhwa and Sunwoo Nare arrive to the Mangdol Madame to pick up Rachel and Baam, but only manage to find Rachel who tells them that Baam died protecting her from the Bull.

After the test has ended, in the waiting area, the confused Regulars are wondering whether they passed since only Rachel was found. When Lero-Ro comes, he tells them that they have indeed all passed, because Baam made an agreement with the Guardian that if he died, all the others would pass - confirming to the group that Baam is really dead, though they are unable to find the body, what causes Rachel to collapse.

In her room, the team discusses what to do; beginning with Hatsu, Baam's friends come to the agreement that they should see to his final wish, that Rachel should be helped ascend the Tower. Finally, Hwa Ryun enters Rachel's room at night, congratulating her and asks how it feels to finally become the heroine of the story. 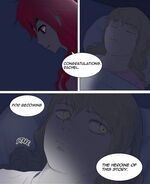 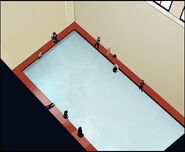 Waiting for answers
Add a photo to this gallery

It was chapter 75 where the main character switch happened... huh?
I must go up in a mountain in order to work, only coming down to society to deliver the script to the director. Haha;
I already gave up on the stars† and the views. I can just receive less money...
Just don't get me fired... Please please. Honestly, because ToG has gotten more popularity then I anticipated,
it is true that I pondered about changing the direction of this piece...
But, I want to draw ToG as I first planned. If I do not, I'll blame myself for the rest of my life.

This epilogue is the chapter where the switch from Part I to Part II occurs.
It's also the chapter where Rachel and Baam's destiny gets separated.
Now Rachel's reason for pushing Baam will appear soon.
So, please stay tuned for the next chapter. ^^

†Translators note: Here, the "stars" refer to the manhwa's ratings. 10 Stars = Awesomeness, 1 star = Fail... and so forth

Retrieved from "https://towerofgod.fandom.com/wiki/Ch.75:_2F_-_Epilogue_-_Rachel_(1)?oldid=148962"
Community content is available under CC-BY-SA unless otherwise noted.