2F - Last Examination (18): This is the seventy-fourth chapter of Volume 1 of Tower of God. It follows Baam as he fights the Bull, which he eventually defeats, but he is then pushed off the platform by Rachel.

Baam must take on the vicious Bull to save Rachel. However, while he can freeze the beast, he cannot attack it. Relying on a desperate gambit, he fires a beam of shinsu right into the mouth of the beast, killing it.

However, Rachel, whose legs were supposedly disabled, stands up and pushes him into the water, leaving Baam in absolute shock... 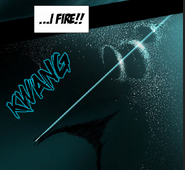 Rachel betrays Baam
Add a photo to this gallery

I'll take a week off and see you at the first part of the Epilogue.


Many suspected Rachel would be more than she seems by her name alone(1).
That is really great foretelling.
After finishing this week's work, I wondered whether take rest for a week or not.
Then I decided to.
Not because I felt sick or was tired.
(Next chapter is almost done, by the way.)
I wanted many people as possible to see this chapter before posting the next one.
Taking a risk at sounding like a arrogant person. ^^;
I would say I want readers to read my comic 'throughout and carefully.


Personally I didn't want to take a break before finishing Season 1.
So I didn't feel much good at resting. Pity.


Epilogue would take about 4 chapters.
It will be mostly about this test and Rachel's backstory.

Retrieved from "https://towerofgod.fandom.com/wiki/Ch.74:_2F_-_Last_Examination_(18)?oldid=148961"
Community content is available under CC-BY-SA unless otherwise noted.