2F - Last Examination (16): This is the seventy-second chapter of Volume 1 of Tower of God. It shows that the Bull has been sent after Baam, causing Yuri to worry, but Androssi convinces her that Baam can win.

Ren's container is destroyed by Kurudan's Dansulsa however, since the body was only a container, Ren still lives. Knowing that Yuri is looking for Baam and that because Baam is an Irregular, Ren as a member of Zahard's Royal Enforcement Division has already sent the Bull to kill Baam. Yuri is prepared to stop the test by ripping the entire testing area out of the ground but Evan and Yu Han Sung convince her that the test is being done at the behest of the Guardian. Still, Yuri seems torn about whether to interfere but Androssi manages to convince her that Baam can succeed - because they have a date on the line.

Finally, Yuri decides to leave, giving Leesoo one of Wolhaiksong's white wings to give to Baam and the instructions to come see Urek Mazino on the 77th Floor. She then leaves, taking both the Black March and the Green April. Yuri's other companions get ready to leave too; the intruder in Khun's Lighthouse is revealed to be a former Khun, while Evan encounters Hwa Ryun on his way out and seems distracted by her. 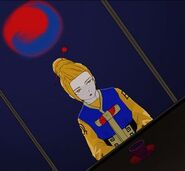 The chairman of (fake) Pepsi 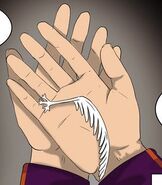 Mazino's waiting...
Add a photo to this gallery


Now it really is time for Baam to show up.


From next chapter and on it will be beginning of Baam becoming main character.
What was Baam so far?
er…
A... good-looking guy?

Retrieved from "https://towerofgod.fandom.com/wiki/Ch.72:_2F_-_Last_Examination_(16)?oldid=148959"
Community content is available under CC-BY-SA unless otherwise noted.