2F - Last Examination (14): This is the seventieth chapter of Volume 1 of Tower of God. It follows the continuation of the Submerged Fish Hunt Test, with Yuri baiting Ren into attacking her.

A mysterious person, possibly from the Khun Family, turns up inside Khun's Lighthouse! After he is confronted by Khun, the stranger tells him that he is just there to find his team, as they are a "ticking time bomb".

Yuri protects Anak from Ren, much to the latter's frustration. He tries to suppress his murderous urges, but fails and releases his horde of Shinheuh against Yuri. She easily demolishes them however and attacks Ren with a devastating finger flick attack. 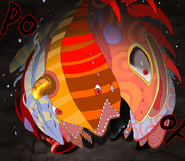 Ren unleashes the Shinheuh on Yuri 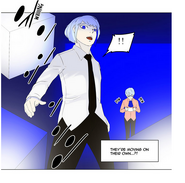 I'm a bit late.
I was finishing something I was making...
The first story that I finished while forming the season 1 of ToG is the first and last test.
Of course, the other tests are important, too, but you should consider how the first test leads to the last test.

Yuri has very strong physical strength even among the Rankers.
The Ha Family is very strong genetically and because of the contract with the Guardian, they are the family with the strongest body strengthening ability.
Because Yuri got that blood very strongly...
her finger flick goes out like a freaking K9.
They should have Yuri in Yeonpyoungdo...
[Yeonpyongdo: An island that got bombed by North Korea last year.]

Retrieved from "https://towerofgod.fandom.com/wiki/Ch.70:_2F_-_Last_Examination_(14)?oldid=153137"
Community content is available under CC-BY-SA unless otherwise noted.