2F - Last Examination (11): This is the sixty-seventh chapter of Volume 1 of Tower of God. It follows the continuation of the Submerged Fish Hunt Test, where Ren tries to force Androssi to kill Anak.

After Ren takes the Green April, Ren's control over the Bull is revealed when it carries the unconscious Androssi to Anak. The attack on them is also explained with Ren stating that the entire Tower is the enemy of those, who like Anak, are the enemies of Zahard.

After the slumbering Princess is awakened, she is told of Ren's involvement in Zahard's Royal Enforcement Division and blackmails her into proving she has not betrayed Zahard by helping Anak. How? By killing her niece.

Unable to find Anak or Androssi, Leesoo's troubles increase as someone approaches him from the shadows. 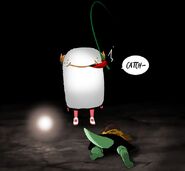 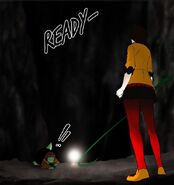 Kill your father and take your rightful place by my side.

Who is the person showing up in the last scene.
Not even me, the author, can guess because it is so mysterious!

Retrieved from "https://towerofgod.fandom.com/wiki/Ch.67:_2F_-_Last_Examination_(11)?oldid=148953"
Community content is available under CC-BY-SA unless otherwise noted.