2F - Last Examination (9): This is the sixty-fifth chapter of Volume 1 of Tower of God. It follows the continuation of the Submerged Fish Hunt Test, with looking for the two princesses and Anak figting Ren.

Leesoo continues his search for Androssi and Anak. In the meantime, Khun coordinates the team's preparation for the hunt.

Anak faces off against one of Ren's 'pets' with her mother's necklace used as bait; as the 'pet' proves far more dangerous than she expected things begin to look bad for her. 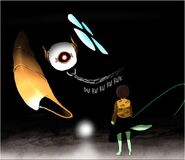 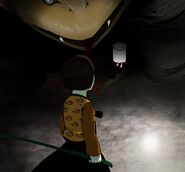 Ren and Anak meet
Add a photo to this gallery

Lizard in danger.
+ Main character who would be useful at clearing snow.
Since the next chapter would require lots of work, I took it a bit easy on this chapter.
Seems I am getting more relaxed even while working.
I guess it is true a job will be easier to do as one works on it.
From next chapter, the point will be back on the test.
The point will be dived into 3 parts, so it would be complex.
I am still working on how to clean them.
Can't confirm I will succeed, though;;
Baam and Rachel's honeymoon...
Well... it is peaceful. Yet;;
[some ranting about Jo Yong Phil, a legendary singer]

Retrieved from "https://towerofgod.fandom.com/wiki/Ch.65:_2F_-_Last_Examination_(9)?oldid=148951"
Community content is available under CC-BY-SA unless otherwise noted.