2F - Last Examination (8): This is the sixty-fourth chapter of Volume 1 of Tower of God. It follows the continuation of the Submerged Fish Hunt Test, with Androssi still fighting the Bull and Ren confronting Anak.

Khun has been working on a plan, to find a path using Sunwoo's Anima ability. The two discuss Sunwoo's ability, and Sunwoo attempts to flirt with Khun a little, to no avail... he seems to be a bit worried after finding out that it might be possible for an Anima to control larger creatures, such as the Bull.

Androssi tries to catch the Bull, but is led into a trap... the Bull distracts her, then comes from behind and drags her underwater! Noticing that it's strength has greatly increased, Androssi realizes that this might be more difficult than she thought.

Meanwhile, Anak runs into Ren, who reveals that he is the one who killed her mother and provokes her to attack. 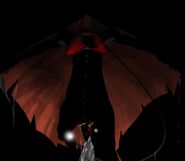 Androssi looking for the Bull
Add a photo to this gallery

Who that went overkill on this year Chuseok, are still alive. Am I seeing a ghost right now?

This chapter was 64 cuts.
Planned to be the shortest chapter so far in Tower of God.
I am a human being too.
So I wanted to rest about it in Chosuk without drawing too much.
And there are some really hard-to-draw moments waiting in some chapters later.
So I sent the finished chapter and began working on the next chapter,
But the short amount kept nagging me.
So I redid the first parts again.
Sorry to never compensate management people for making you work twice. (Sorry again.)
Perhaps it is fun to compare the two versions if you can.

P.s.
It is very hard to finish a chapter with holidays between.
So please do not say it is a 'nature' thing and abuse other authors who are taking a short break.
Took Audio Drama Cafe's address from Webtoon.
It became a totally different place since I went there last time.
And they won't respond to my messages...
So I took it out.
If anything becomes confirmed, I will tell.

Retrieved from "https://towerofgod.fandom.com/wiki/Ch.64:_2F_-_Last_Examination_(8)?oldid=148950"
Community content is available under CC-BY-SA unless otherwise noted.