2F - Last Examination (7): As Baam and Rachel are waiting on their platform, Baam notices a powerful yet strange sensation from above.

Meanwhile, the hunt continues with Hatsu informing the team that the Thieves have begun moving in great numbers. The Bull proves to be easier to deal with than anticipated as Androssi dominates their fight. However to avoid losing their bet, Anak interferes, allowing the Bull to escape. As both Anak and Androssi run off to pursue it, the RED member Ren looks pleased that they have taken the bait. 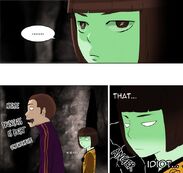 Anak is jealous over Leesoo 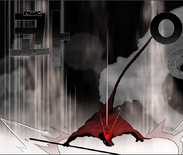 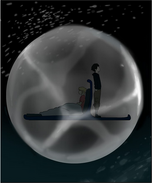 Baam and Rachel in the bubble

It's a thorn
Add a photo to this gallery

Like some might have guessed, the Bull was a fake.
While I was drawing Yuga, I kept getting hungry for some reason...
I had been not eating well because I felt sick,
So I began to make a list of 'what I want to eat'
Now with my stomach becoming better I want to check this list...
And Chuseok is coming, so I will eat between holidays to fatten up a bit.

Retrieved from "https://towerofgod.fandom.com/wiki/Ch.63:_2F_-_Last_Examination_(7)?oldid=107688"
Community content is available under CC-BY-SA unless otherwise noted.