2F - Last Examination (6): This is the sixty-second chapter of Volume 1 of Tower of God. It shows a flashback of the strategy meeting for the Submerged Fish Hunt Test and in the present Androssi is going to fight the Bull.

We are treated to a flashback of the team, gathered to discuss their strategy for the test: to eliminate the Giant Marsh Worms (who will attempt to suck up the fish) then attempt to get the Thieves and Dogs to fight each other and to reserve their two strongest Fishermen Androssi and Anak, to take on the Bull, should it show itself.

Back to the present, neither Androssi nor Anak seem to want to fight the Bull. Finally, they decide to make a bet - they will fight it in five-minute turns; if Androssi wins, she gets the Black March from Anak, if Anak wins, Androssi becomes her slave - Androssi gets to fight first. Rak and the other Spear Bearers wait for their sign to attack while Hatsu announces that the Thieves have begun to move. 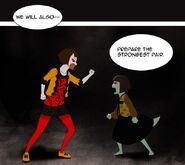 Androssi and Anak fight over the Bull

Coffee machine scaring
Add a photo to this gallery

I am not good enough to go 'short' for a while.

Not much development, so I don't have much to write about.
This chapter is mostly about Princesses fighting against each other;;
The main part of the test is yet to begin...
So perhaps from next chapter, the plot will go faster.
It was perhaps somewhat different from what you people are expecting. Haha.
I did say I will control the length of the comic because of my body condition, but 'maybe' next chapter would be a bit longer.
I keep thinking I should take care, but I am too greedy to draw shortly.
I would have to from the next chapter and on;;

Retrieved from "https://towerofgod.fandom.com/wiki/Ch.62:_2F_-_Last_Examination_(6)?oldid=148948"
Community content is available under CC-BY-SA unless otherwise noted.