2F - Hide and Seek (13): This is the forty-seventh chapter of Volume 1 of Tower of God. It follows the continuation of the Hide-and-Seek test, where Androssi is fighting the other Fishermen and Ho try to kill Rachel.

Ho manages to lure Rachel out of her Lighthouse and tells her who the person targeting Baam is... HIM. He then pulls a knife out and presses it to Rachel's throat.

Meanwhile, Baam gets in the way of Hong Chunhwa's blast to protect Androssi, and says that Androssi is right, he doesn't have what it takes to climb the Tower - he will only fight to protect those precious to him, and believes the stars are not worth killing one's friends over. Androssi screams back at him that he will have to be ruthless to protect Rachel, and asks him why he chases her, though she does not want him, and wonders what he likes about her. Baam replies simply that "the heart moves where the heart wills" and walks away. Des Lion and Hong proclaim Androssi as "dumped", and ask her if she'll run after Baam. Androssi decides not to and staying to fight them instead.

Meanwhile, Ho questions Rachel on how Baam was able to master shinsu so quickly when it took him years and asks her what God should take in return for that. Baam finds a Lighthouse, and one of the Light Bearers informs him of the situation, including how they had lost contact with Rachel. He is told that Rachel was in the Safety Zone and realizes that he cannot get there quickly. Ho says that he will kill Rachel on behalf of "God", only for a real "god" to arrive, Quant. 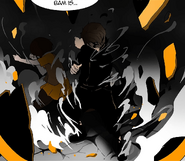 I was thinking 'Wow, Quant is looking awesome'.
He is actually on a totally different level from the Regulars, but at the moment he is 'shinsu-less'.

The hardest part was Baam's dialogue.
A guy with the heart of a newborn baby, wanting to be with the one he holds the dearest. But she wants to climb the Tower, a place where people hurt each others, is something he can't understand.
I could not imagine what that person would say.
So even with the story all written, it was hard to draw.
And the end product feels incomplete, due to my lack of skills and work time. ^^;;
If the test so far was chaotic,
it will be solving that chaos from next chapter on.

PS
Ho and Rachel aren't over the safety line, so Quant may act against them.

Retrieved from "https://towerofgod.fandom.com/wiki/Ch.47:_2F_-_Hide_and_Seek_(13)?oldid=149216"
Community content is available under CC-BY-SA unless otherwise noted.