2F- Hide and Seek (9): The test begins for Team B. After running for a bit they take a break, Des Lion sucks up to Androssi, and there is a flashback to just before their test started, when they were deciding on a plan. All of them were arguing until Androssi took charge and made them go along with her plan - that all the Fishermen move together. Naturally, Des Lion also praised this plan to no end.

Back in the test, Mauchi and Parakewl are still complaining about Androssi's plan, thinking that their "Spear Bearer Revolution" plan is better. Hatsu mocks them, stating that Androssi's plan is much better.

Ho and Serena are idling time away. Serena acts a bit silly, then suddenly asks Ho why he decided to climb the Tower. She then gives her own backstory as a thief in the middle area of the Tower. One day, her would be victims had a Ranker with them. That Ranker killed many of her fellow thieves. While she prayed for her life, Headon appeared and brought her into the Tower. Since then, though, she has had doubts about her will to keep climbing - she doesn't want to hurt her friends in the process.

In the meantime, Hatsu got into a small fight with Mauchi and Parakewl, easily taking their spears. Just then, he senses Quant and tells the two Spear Bearers to run and prepare to try the Spear Bearer Revolution. Serena and Ho are informed of the situation, and Serena tries to rush off and help. However, Ho ominously disappears. 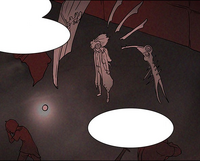 Serena and Headon
Add a photo to this gallery

Unlike the A team, B team looks shaky from the beginning.
It would be fun to compare their tests.
To be honest, even though A team looks as if they executed their plan well, they are actually all cheated by Khun.
So it is hard to say A team is better than B team, as each individual is trying to save themselves.
From next chapter on, lots of fighting scenes.
So I have lengthened today's chapter since it has more talk and emotions.
And this chapter's plan was about 120 cuts.
When I woke up, I wondered if yesterday's me was crazy.
Split personality?
Well, I did finish them by sacrificing my sleep.
So maybe not.

Retrieved from "https://towerofgod.fandom.com/wiki/Ch.43:_2F_-_Hide_and_Seek_(9)?oldid=107668"
Community content is available under CC-BY-SA unless otherwise noted.