2F- Hide and Seek (8): This is the forty-second chapter of Volume 1 of Tower of God. It follows the examiners as they give out points to the Team A members and question the strength of Team B compared to Team A.

The examiners give out points for Team A's efforts. Only Lero-Ro has a hard time with this, and that's because he was able to see Quant being helped up by Khun and Laure, a fact which all other examiners except Yu Han Sung seem to be unaware of. Yu Han Sung's explanation is that Khun has really been helping his friends, rather than his team, the whole time. He then goes on to philosophize for a bit before admiring Khun, relishing the thought of crushing him possibly because of his own ego and pride, and awarding him perfect team points all within a short while.

Yuga eats some donuts while Team B's turn is about to start. The other examiners feel that Team B is significantly weaker than Team A, with the exception of Androssi. Hax reveals that the top two ranking Wave Controllers were both in Team A, indicating that the second-ranked Wave Controller was either Rozéal or Hwa Ryun, with Laure almost certainly the top-ranked Regular among them. Yuga counters by stating his belief that Baam is actually the most talented Regular, though he is more like a lottery ticket than someone naturally strong. Finally, the test for Team B starts. 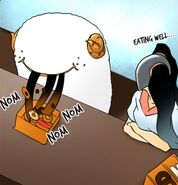 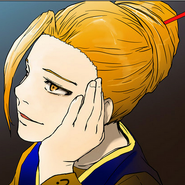 It was a chapter to catch our breath after the A team test.
I was unsure about putting this chapter or not,
But without it, the pace looked too fast for a good story.
As I publish my work,
I feel I am losing and gaining both thanks to aiming for entertainment.
I'd wish to give something better than lame jokes.
Making a comic that is fun to read is really hard.

Retrieved from "https://towerofgod.fandom.com/wiki/Ch.42:_2F_-_Hide_and_Seek_(8)?oldid=153120"
Community content is available under CC-BY-SA unless otherwise noted.