2F - Hide and Seek (6): This is the fortieth chapter of Volume 1 of Tower of God. It follows the continuation of the Hide-and-Seek test, with Team A being really close to winning.

Quant orders Khun to open his bag, which he doesn't, giving the explanation that the badge used in the test is made of a special material that cannot be compressed. Khun then tells Quant that Anak, Team A's "It", has jumped off the bridge to the lower exit, though secretly she is actually on top of one of Khun's light cubes floating out of sight. This is a trap to try to get Quant to jump off the bridge by himself.

Quant notices that Khun is only using one of his two light cubes, and suspects that Anak is riding atop Khun's other one, a suspicion which is surprisingly accurate. Quant then explains that Lighthouses are made of Suspendium and that they must be kept within a Light Bearer's range of shinsu control in order to be used. Thus, if Quant drags Khun down with him, his floating light cube should fall with them, letting Quant catch Anak. Quant jumps off the bridge while grasping onto Khun. As they fall, though, Khun pushes Quant away and holds on to Manbarondenna, which had secretly been hanging on to his other light cube via a pulley made of high-grade Suspendium. Thus, only Quant falls, leaving Khun up near the bridge with Anak. Anak, safe on the bridge, runs for the exit. 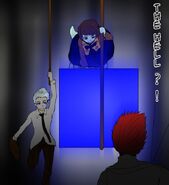 Khun and Anak remain safely floating near the bridge while Quant falls. 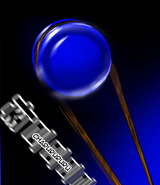 Khun using a pulley
Add a photo to this gallery

There are many temptations in life. Next is the B team.

Hmm... In the case of the A team's story: The resulting story is an experiment of ways to dynamically and enjoyable explain the position battles and property compositions. And because of it, I'm slightly worrying if it wasn't too contrived.
To be honest, I expected that there would be people asking me how the pulleys were configured in the Androssi and Baam's food exchange scene, but it seems there wasn't any (...OTL) Thinking about it, since it is a comic after all, I think everyone just understood it and let it pass.
But I'm still shoving the answer in like this. haha;;
Recently, I feel like the story's becoming too much about set-ups that from next week, I plan to go at it more simply.
From the start, the plan was that if A team was a lecture, B team is an actual fight... That was the plan. ^^;
B Team's start may begin next week, but
there will be an upset in the next chapter as well. So, I hope you're all anticipating for it.

Retrieved from "https://towerofgod.fandom.com/wiki/Ch.40:_2F_-_Hide_and_Seek_(6)?oldid=149209"
Community content is available under CC-BY-SA unless otherwise noted.