2F - Hide and Seek (3): This is the thirty-seventh chapter of Volume 1 of Tower of God. It shows Team B discontent with the team-composition, while Team A has made contact with the Ranker.

The members of Team B, waiting until Team A's test finishes, are already at odds with each other about the composition of their team. Just then, they notice that Team A has already made contact with the Ranker, Quant. Quant talks to Leesoo for a little bit, informing him that he knows it's a trap and Leesoo is the bait. Nonetheless, he goes in for the attack, prompting Khun to tell Amigochaz to throw a spear, which Quant easily dodges.

Quant destroys the Lighthouse near Leesoo, leaving him in complete darkness. Despite the darkness, Quant is still able to maneuver by reading shinsu. Just as Quant is about to attack Leesoo, another Lighthouse activates, giving Anak a chance to attack Quant. This catches Quant completely by surprise since he expected the Lighthouse to be with Team A's 'It', Anak, who should have been running for the exit. In order to escape, Quant uses a mysterious technique, Black Fish. He then grabs Anak's Green April and gets angry. 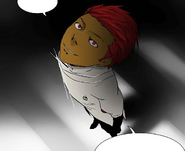 There is a blog post around the time of this chapter, but it does not pertain to this chapter and is just SIU ranting about his personal life.[1] However, there is a translated blog post that is listed beneath, but it currently not know where this is information is sourced.

Because this game is focused more on Team B than Team A,
Team A test will end shortly.
The original plan was that it will end in 1 or 2 chapters
But there was too much information revealed, so it would be too messy.
I've decided to be less selfish.
Please understand me.
The truth is... I won't give away too much ^^;
Because I am greedy, after all.

흑린 (Heuk-rin) technique that was revealed in this chapter is...
... shinsu technique that the Scouts (탐색꾼) use to block the Lighthouse's light (등대).
Using shinsu, the light is temporarily blocked.
It is an advantage for them because of the Scouts (탐색꾼) like darkness. Thus this technique is used often.
(Heuk-rin's name means that like a waving black feather, it blocks out the light.)
Of course, the Light Bearers (등대지기) can use reverse technique to block the blocking spell.

Reel Inventory is the Fisherman's armament.
It's like a real fisherman's equipment, a reel. It can analyse the shinsu and control its movement
Also, it can shoot throw hooks and nee (니)
Translator's note: I don't know what nee is. (Maybe a short version of needles?)

Retrieved from "https://towerofgod.fandom.com/wiki/Ch.37:_2F_-_Hide_and_Seek_(3)?oldid=149206"
Community content is available under CC-BY-SA unless otherwise noted.