2F - Hide and Seek (2): This is the thirty-sixth chapter of Volume 1 of Tower of God. It follows the introduction to the final test and the beginning of the first round with Team A.

Lero-Ro meets up with Yu Han Sung to receive instructions about the final joint test for the Regulars. Lero-Ro is doubtful that Hide-and-Seek with a Ranker is a good idea. Just then, Quant enters, bringing coffee and informing Lero-Ro that he is the 'It' of this Hide-and-Seek test. Lero-Ro is flabbergasted.

Later, Lero-Ro announces the test for the remaining 28 Regulars (not counting Rak and Akryung, who already passed) and reveals the two teams of 14 will be participating. Yu Han Sung then goes over the rules of the test in detail. At one point during the explanation, Leesoo asks who the 'It' is going to be. Quant seizes the moment and bursts out of a box that had been next to the table where the test examiners are sitting, humorously causing Yu Han Sung to accidentally splash coffee onto his face.

Later on, the test for Team A is starting. They quickly decide to make Khun the leader. He hatches a plan to catch Quant, thinking that the Ranker won't be expecting such a bold strategy. As the first step in their plan, they release some bait to lure Quant into a trap. The bait's name? Ship Leesoo. Shortly after Leesoo goes out, Quant appears with a smug smile on his face. 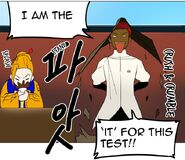 Advertisement: Quant also jumps out of birthday cakes on parties. 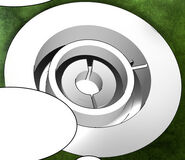 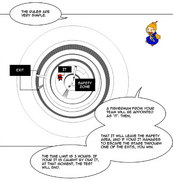 Hide-and-Seek is a game of tag. So you're it.

Fun facts for this game.
In the Tower, the Light Bearer position is very important.
One good Light Bearer is better than two decent Fisherman of the team.
Of course if the Fisherman is Level cheated like Yuri, that Fisherman takes any position.
Each Light Bearer has different limits on how many Lighthouses they can control and the area they can be controlled in.
Inexperienced as Khun is right now he can only use 1 Lighthouse, 2 if 1 is stationary.
Team vs one is very hard for the one to win regardless of experience, though.
Hope you can see why battles are based on positions.
By the way Gator passed early by winning the bonus game. He will show up at the final test.
After some hard work, my wrist is in pain. I would have to take better care of it.

Retrieved from "https://towerofgod.fandom.com/wiki/Ch.36:_2F_-_Hide_and_Seek_(2)?oldid=149205"
Community content is available under CC-BY-SA unless otherwise noted.