2F - Hide and Seek (1): This is the thirty-fifth chapter of Volume 1 of Tower of God. It follows Baam as he improves with shinsu and Ho becoming more envious of him in turn, which culminates in Ho considering to take out Baam by eliminating Rachel.

Rachel is buying food "to go" in order to avoid Baam. Meanwhile, Androssi talks to Baam about his encounter with Yuri Zahard. She calls her a thug, but Baam doesn't believe it and still considers her a kind person.

Later, Androssi and Rachel meet in the girl's restroom. Rachel confirms that she hasn't revealed her true identity yet, though Androssi questions her decision, asking if whatever is at the top of the Tower is worth more than Baam.

The classes continue, and Baam continues to learn how to control shinsu from the Wave Controller instructor, Yuga. Though Baam considers himself to be having trouble, the fact that he's a genius becomes clear due to that rapid pace at which he is learning. Yuga even comments that it took him two years to create his first baang of shinsu, but Baam has done so in a mere two weeks. Ho sees Baam's remarkable talent and questions his identity, though his words go unheard by the sleeping Laure.

Ho is called up after Baam, and he becomes quickly frustrated when he sees his own inadequacy with controlling shinsu. After the lecture, he goes back to his room and has a flashback of his dark past.

Suddenly, a note slips under the doorway, telling him to eliminate Rachel if he wishes to remove Baam as a competitor. This causes Ho to burst out of his room, looking for whoever left the note, but no one is there. Full Black hears Ho and opens his door to check on him, but Ho brushes him off with a comment about the weather. 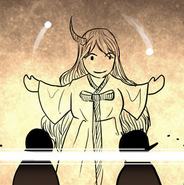 A brief look into Ho's past.

Rachel and Androssi in bathroom
Add a photo to this gallery

There will be joint testing starting from the next chapter.

It's Hide-and-Seek, the last of the Position Test.

Now the real test will start again.
This test will have a bit simpler rules than the Crown Game, and the testees' roles are divided by Positions, so I think it'll be better if you pay attention to it when you read.
Well, the Regulars don't have enough skills that their Positions require, so I don't think I can show you the proper battles by Positions.

I posted supplementary explanations about the shinsu manipulation.
It's quite complicated so it may be hard for you to understand.... But it doesn't really matter if you don't anyway.

Then please look forward to the Hide-and-seek test that starts from next chapter.
Note - the 'it' of this exam is the Ranker.

Retrieved from "https://towerofgod.fandom.com/wiki/Ch.35:_2F_-_Hide_and_Seek_(1)?oldid=149204"
Community content is available under CC-BY-SA unless otherwise noted.