2F - Zahard's Princesses (1): Androssi and the other Regulars are in the cafeteria. After having some difficulty obtaining the food that she wants (which costs test points), Androssi ends up sitting near Baam, Hatsu, and the other Regulars. Baam tries to get Androssi to sign Hatsu's friend sheet, an action Androssi chooses to interpret as Baam introducing her to a boy. Using one of her favourite shoe metaphors, Androssi then explains that in her family (i.e. amongst Zahard's Princesses), dating is strictly prohibited. Anak walks by and outs Androssi as a Zahard's Princess.

Later, in the Fisherman class, Hax announces that they'll have a simple test. The rules are simple: the Regulars standing on top of large white cylinders must make the other Regulars fall off. As the test starts, Anak immediately goes after Androssi. They banter for a bit, then Androssi throws away her Needle, indicating that she won't need it to deal with Anak. 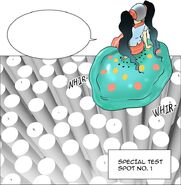 Androssi gets ready for the test.

It is easy to see in which chapters I had to work with a bad health.
But no one is in good health the entire year, so I have to get the work done in any situation.
And next week is the new Lunar Year, so I would have less time since I have to visit my family.
From now on it is about the story of Androssi and Anak.
Some characters will have their story like this, while position test are going on.
Then Baam's story will begin leading to the climax of season 1.
I expect this to take like 50 chapters.

Retrieved from "https://towerofgod.fandom.com/wiki/Ch.31:_2F_-_Zahard%27s_Princess_(1)?oldid=112643"
Community content is available under CC-BY-SA unless otherwise noted.