The Wave Controller class starts and the instructor introduces himself as Yuga. He explains the basics of what Shinsoo is and tells the Regulars about the necessity of making a contract with the Guardian of the Floor. Laure, fairly adept with Shinsoo manipulation, had already made a contract, but the others hadn't, so Yuga instructs the rest of the Regulars how to do it. Baam does so and finds himself face to face with the Second Floor Guardian, a giant eel. Although the Guardian thinks that Baam looks tasty, it makes the contract with him anyway.

In the Spear Bearer class, instructor Yu Bok-Dol issues a challenge to the Regulars: anyone who can hit a 'very very close' (actually far away) target within four days automatically passes the Position Test. Rak jumps on the challenge, throwing a spear and missing completely. Akryung steps up to throw a spear and hits the target on his first try, frustrating Rak. 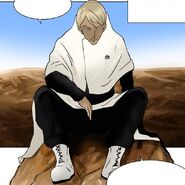 Spear Bearer Instructor
Add a photo to this gallery

Oh, right, after post.
My condition is not really good since the Tower of God Webtoon release.
I had some time to spare after finishing this chapter.
But I made a regular list after popular demands, using up my free time...
I was worrying about forgetting some characters, I thought up some names in one second, overlapping names
Many readers believe I have made perfect setting for Tower of God, but I am actually making them quite shallower than you think;; (But of course I am doing my best to not make mistakes.)
Now the tests per positions will begin. Wouldn't it be fun to guess who will succeed in which position?

Retrieved from "https://towerofgod.fandom.com/wiki/Ch.29:_2F_-_Position_Test_(2)?oldid=120602"
Community content is available under CC-BY-SA unless otherwise noted.