2F - Rest (1): This is the twenty-sixth chapter of Volume 1 of Tower of God. It shows the end of the Crown Game, with no winners except Anak who won the Black March, while Baam is out cold.

The Crown Game is over and everyone looks surprised at what happened. Hwa Ryun is injured, while Rachel is concerned about Baam. In the end, Androssi's team didn't take the crown, so there was no winner. Before the next test, though, there is a rest period of three days.

Later, in the Director's office, Lero-Ro and director Yu Han Sung are having a conversation. Yu Han Sung remarks that Lero-Ro seems quite tall. Lero-Ro replies that he only seems smaller because he usually stands next to Evankhell who is very tall. Yu Han Sung asks Lero-Ro if he wants some coffee. Lero-Ro gladly accepts his offer, asking if he can make a Cafe Latte. While they're drinking coffee Yu Han Sung asks Lero-Ro why he came. Lero-Ro says that there was a problem with the last test and that the Crown Game this time was held without a winner. Yu Han Sung asks why that is a problem. Lero-Ro says that he heard from Quant that Yu Han Sung had proposed the Crown Game to quickly send the problematic three to the next Floor. He also adds that one of the three seemed to be familiar with a Regular from their district and according to the rules people who knew each other before shouldn’t take tests together. Lero-Ro asks Yu Han Sung what his true reason for including the three was.

Yu Han Sung asks Lero-Ro if he knew the reason why they gather all the Regulars on the Second Floor to test them. Lero-Ro answers by saying, that it's to test which Regulars are worthy of climbing the Tower. Yu Han Sung explains that this is what people are led to believe, but it's just a front. The real reason is that there are powerful Regulars, who are far too dangerous to be let to climb the Tower. Therefore, the real purpose of the tests is to weed out the ones "who will bring harm to the Tower".

After the explanation Lero-Ro says he still seems to be confused, to which Yu Han Sung asks him who he thought was the most dangerous and then asks him if that person wasn't stopped because of a person he sent. Lero-Ro thanks him for the coffee and is about to leave, but before he leaves he asks the director if he ever heard about someone manipulating shinsu without any restriction. Yu Han Sung says that he's only heard of the Irregular Urek Mazino doing so. After Lero-Ro leaves, Yu Han Sung says that he isn't as easy to manipulate as Quant.

Lero-Ro thinks about what Baam did during the Crown Game when he attacked Hwa Ryun with shinsu without a contract. Lero-Ro thinks to himself that it wasn't so much like Baam manipulated shinsu as it was like the shinsu attacked Hwa Ryun with a will of its own. Even though it wasn't a powerful attack, Lero-Ro wonders how it was done because it was against the laws of the Tower.

Elsewhere, Khun sits near an unconscious Baam. Khun is worried that Baam won’t recover in time for the next test. While he is thinking about this Rachel walks into the room and introduces herself. 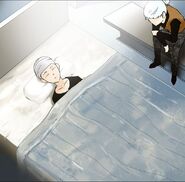 The injured Baam recovering in his room.

Rachel visits Baam.
Add a photo to this gallery

Relaxation gives me a headache...

Today's points.
Yu Hang Sung is dark inside.
Tights (Hwa Ryun) is the most beautiful (among the 2nd Floor Regulars).
And the main character blinded one eye of that girl.
Urek Mazino is a popular guy.
Rachel is here, but the main character is sleeping.
Soon the Position pick will begin and the last test of 2F too.
The really fun part of Tower of God is about to come.

Retrieved from "https://towerofgod.fandom.com/wiki/Ch.26:_2F_-_Rest_(1)?oldid=149195"
Community content is available under CC-BY-SA unless otherwise noted.