Tower of God Wiki
Register
Don't have an account?
Sign In
Advertisement
in: Part I, Chapter, Crown Game
English

Episode 5
2F - Crown Game (12): This is the twenty-fifth chapter of Volume 1 of Tower of God. It follows the end of the fifth round of the Crown Game and the appearance of Yuri and her new team heading for the Second Floor.

Baam remains shocked at the appearance of someone, who he's convinced is Rachel. Meanwhile, Androssi taunts and fights the woman in tights. Rak and Khun, busy fighting Goon and Yung Changsoo, are confused as to why Androssi is helping their team rather than going for the crown. At any rate, they believe that they've essentially won the game.

Androssi's battle with the woman in tights continues until Androssi slips on her high heels, which lets the woman escape from the engagement and proceed towards the throne. She then goes after Rachel, striking her in the head, which prompts Baam to jump off the throne, abandoning the game and block her next attack with his body. Just as his consciousness fades, he thinks about protecting Rachel and, mysteriously, the mask of the woman in tights is attacked, shocking everyone. A surprised Lero-Ro exclaims, "What the hell...did he just do...?"

Elsewhere, we see Mr. Blueberry using what appears to be a game controller, with Evan Edrok sitting nearby. Kurudan and Yuri are also there, and Kurudan complains about how long it takes to get to the Second Floor. Ms. Ice Strawberry and a large guy with horns, bearing the mark of the Wolhaiksong, have just returned from scouting out the best path to proceed. They debate for a bit on which route to take to the Second Floor, at one point talking about the breeding grounds of Steel Eels, which are apparently regions of extremely dense shinsu. This causes Kurudan to exclaim that if Yuri can find someone who can go about in such areas with no restriction of movement, he'd hand over his Wolhaiksong mark. To this, Yuri responds that she'll give his Winged Tree to someone when they reach the Second Floor. 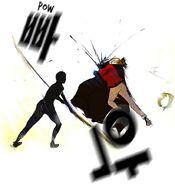 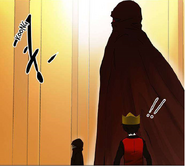 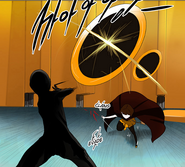 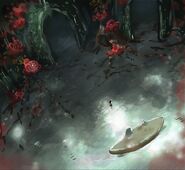 Yuri and her companions going to 2nd Floor

Finally Crown Game is over.
I had worries about directing this chapter, it feels somewhat cut off in the middle.
This was made to give tension and urgency, hope it worked.


And next chapter looks harder to direct. Fixing it for fifth time now.
Season 1 of Tower of God has a large cast, and it tells many stories at once, so one wrong chapter makes the whole story ruined.
I won't choose something like this for my next webtoon;;


About Yuri.
She is really social for a Zahard Princess.
Wingtree is something like anti government, yet she has close relationship with its members.


From next chapter on it will be the latter part of Season 1.
Looks like 70-80 chapters will be Season 1 in this pace.


About setting release, I am still undecided about how to do it, Cafe or Blog. They will be uploaded after I get them in order.

Some Tower of God settings are going to be un view-able for a while.


Twitter - I have been avoiding it for fear of me speaking nonsense. With my fans supporting it, sometimes it went a bit too far.
Sometimes harsh criticism would work better. ^^;;


Assistants will be nice. Maybe some real good artists from Best Challenge… But I can't promise good pay…


To talk about Best Challenge.
I actually did not aim to be an author.
Just drew to tell what I wanted to tell.
But as chapters went on I got attention and could not stop, then one day I became a real Webtoon author.
To be honest, I never learned how to draw comics well.
Even though I became a Webtoon author, the work has not changed much.
I get paid, and attract much more attention, but that is about it.


People tend to envy others' position, only to learn why he/she could not get it after sitting on it.
That is how I feel about being Webtoon author, sitting in gigantic chair my feet won't touch the floor when I sit.


But now I became Webtoon author, I will do my best.
To the authors who are in Best Challenges, I am cheering you on!