2F - Crown Game (11):  This is the twenty-fourth chapter of Volume 1 of Tower of God. It follows Khun's Team as they had an easy time in the fourth round, but the fifth round proves to be more perilous.

As Baam, Khun, and Rak take it easy after establishing their dominance, Androssi and her team enter the fray, as well as a menacing character's team and a few other teams. This menacing unknown person devastates countless Regulars within seconds, eventually quickly making her way to Baam. Khun and Rak are obviously troubled by this and panic. However, they can't do much to prevent it since they themselves are busy battling other Regulars.

She arrives in front of Baam and tells him to give up the crown, which he refuses to do. In response, she tries to attack him, but Androssi blocks the attack just in time. Khun cautions Baam about trusting these people from the other testing district, to which one of them responds "Don't worry. I won't steal the crown". Baam is shocked, recognizing the voice as belonging to Rachel. 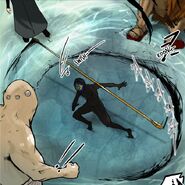 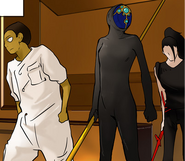 Mask girl beating all
Add a photo to this gallery

Baam is a Rachel fanboy.

My sleep pattern is getting messed up recently, due to the waiting for Tower of God uploads.
The Crown game will be over next week.
Now it is the turn for the story about Baam.

Since this manhwa is based on the Shōnen genre, it will have Baam's internal and external growth in the spotlight. Baam will realize his powers and advance farther as he climbs the Tower.
That is the main attraction of Shōnen. ^^
But unlike Shōnen, Baam does not push his 'justice' and 'friendship' on others.
His powers are not used for something like that. (Like my other comics' main characters)
So it will be safe to say Tower of God's story and philosophy stands somewhere between Shōnen and Seinen.

P.S. Androssi and the girl who talked to Baam is a different person;;

Retrieved from "https://towerofgod.fandom.com/wiki/Ch.24:_2F_-_Crown_Game_(11)?oldid=149193"
Community content is available under CC-BY-SA unless otherwise noted.