2F - Crown Game (10): Round 3 ends, with the next round having three teams enter it. One of the teams turn out to be on Khun's side, allowing Khun's team to sit back and win the round without doing anything.

The other Regulars realise that Khun's bag, Manbarondenna, has the ability to clone things. Round 3 ends when Baam sits on the throne, wearing the crown.

Round 4 begins with Hoshi's team, Blarouse's team and Red Hair's team entering the fray. Inoa Yoran and Ucha agree to take on Khun's team first, but suddenly Ucha and his comrades are attacked and easily defeated by Blarouse's team.

While this is happening, Khun explains to Rak that he had collected Blarouse, Kukaku Rakukakuka and Grey in his bag way back during the very first test, promising to help them pass the tests in return for their help. When he went to the bathroom earlier, he had actually released Blarouse and the others from his bag, telling them to help him once he signalled them by taking off his bandanna and tying it differently on his head. Hoshi's team is defeated offscreen, then Blarouse's team retreats back into their cell, having done their job. This concludes Round 4 of the Crown Game. 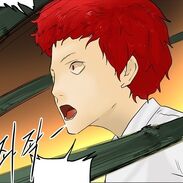 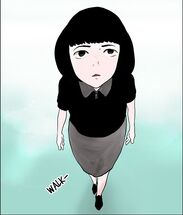 Grey
Add a photo to this gallery

This chapter was for catching up with the hints that have be thrown away so far.
I was praising myself for the absence of grammar mistakes, but some people were kind enough to point out some. I should work harder on vocabulary.
Hints were given away since the beginning of 2F, but many seem to be surprised today.
I try to draw so the story will go after foreshadowing. Sudden surprise is not my type...
Crown game will be over 2 chapters later with the climax next week.
Then it is the turn for behind stories of characters and the main story.

P.S.
Khun's speed boost is due to letting go of people inside Manbarondenna.
The weight changed, so he has been carrying the weight of more then three people with one hand all along.
It is a common trait of the children from the 10 Great Families.
P.S. 2
Khun's willingness to help Baam is mainly due to his past with 'women', which will be revealed later on.

Retrieved from "https://towerofgod.fandom.com/wiki/Ch.23:_2F_-_Crown_Game_(10)?oldid=120340"
Community content is available under CC-BY-SA unless otherwise noted.