2F - Crown Game (5):  Anak dominate the round, causing Laure's team to give up. The Black March reacts to Green April, which Anak notices and confronts Baam.

Laure dodges the Green April, which Anak had just ignited. Lero-Ro, onlooking, is disappointed, since he was hoping that Anak would be as strong as Yuri when she had just entered the Tower. Laure somehow continues to dodge the Green April, even though it is capable of splitting into multiple parts. Khun, upon seeing this, just about gives up because of Anak's overwhelming power.

Baam continues to struggle with the Black March, which is reacting to the presence of the ignited Green April. Ho and Serena grab Laure and flee the arena, knowing that it has become too dangerous for them. Meanwhile, Anak senses the Black March and busts down the entrance of Khun's team, demanding the Black March from Baam. 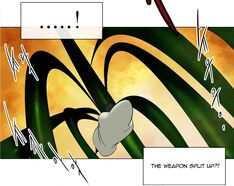 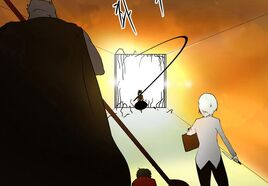 Anak breaking into Baam, Khun and Rak's room
Add a photo to this gallery

The Crown game is getting more interesting. Now we're about midway through.
Anak's identity will be revealed soon, too.
By the way, there are many other Ignition weapons apart from the 13 Month Series.
Many Rankers use Ignition weapons as their main choice.
And the 13 Month Series are good, but they are not the best.
Yuri herself uses better weapons than Black March.
But the Series do have important meaning to them.
P.S.
Seems I am having bad conditions these days...

Retrieved from "https://towerofgod.fandom.com/wiki/Ch.18:_2F_-_Crown_Game_(5)?oldid=120316"
Community content is available under CC-BY-SA unless otherwise noted.