2F - Crown Game (2): Anak goes in alone against Shopin's Team and demolishes the whole team. Shoping's Team then tries to rush for the throne, but Anak reaches the throne before them and puts on the crown. Anak being stubborn chooses to stay on the throne, to Ship Leesoo's dismay.

Anak chooses to fight against Shopin's Team alone, much to the annoyance of Kon, who decides to fight her one-on-one. He goes down easily to a forceful push from Anak, which sends him flying into the wall, leaving him unconscious. This spurs Dédé Kancho and Shopin to attack. Shopin actually manages to get a punch in, but it doesn't phase Anak at all, who quickly dispatches the two of them. Meanwhile, most of the onlooking Regulars are dumbfounded by her strength, though Androssi cracks a smile, possibly in excitement.

Shopin's team, beaten but not yet defeated, hatches a plan to rush towards the throne and take the crown, realizing that they don't actually have a chance to beat Anak in order to win. Nonetheless, Anak also proves to be much, much faster than any of them, quickly jumping to the throne and putting the crown on her head, ending the round. The other Regulars speculate that Ship Leesoo will take the throne, leaving Anak and Hatsu free to battle, but to everyone's surprise Anak decides to stay on the throne, simply stating "I don't want to". 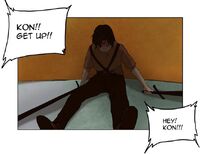 He's okay
Add a photo to this gallery

More battle scenes, more editing, more wrist pain.
But I want to do well on this...
It feels like I am studying human body drawing again.
I hope someone would come and model for me....

The Crown game does not need much posting to talk about. Haha.
Please enjoy.
PS. Some said this chapter is short... I hope you are joking.

Retrieved from "https://towerofgod.fandom.com/wiki/Ch.15:_2F_-_Crown_Game_(2)?oldid=120285"
Community content is available under CC-BY-SA unless otherwise noted.