2F - Crown Game (1): This is the fourteenth chapter of Volume 1 of Tower of God. It shows Yu Han Sung needing to find a solution for Quant's mess, while the Regular's sosialize until Lero-Ro offers an extra test.

Yu Han Sung is shocked to discover that there are only three examinees who passed the survival test. When Quant reveals that there was an Irregular and a Princess of Zahard in the group, he is even more outraged. Both of them are trapped in a predicament since if Evankhell finds out, the punishment will be severe. However, Yu Han Sung promises to cook up a plan for this predicament. While alone, Yu Han Sung leaves his angry demeanor and lays down on a bed, there he puts on a smile and compliments his own intelligence. This might have been his plan from the start.

While Khun goes to the bathroom, Ship Leesoo strikes up a conversation with Baam. While the Regulars are resting, Lero-Ro enters the chamber, revealing an optional game that they can participate in. Few are interested until it is announced that the winners "earn the right to go to the next Floor".

Lero-Ro explains the basic rules of the Crown Game, with the full rules being available in an instruction book besides the buzzer. While Lero-Ro counts down for the start of the first round, several teams are discussing whether they should join the round or not. The first round begins, with Hatsu's Team and Shopin's Team choosing to join the first round. 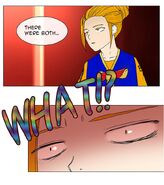 There were both an Irregular and a Princess of Zahard...WHAT!?

Evankhell's punishment
Add a photo to this gallery

Free information. There is no such thing.

Retrieved from "https://towerofgod.fandom.com/wiki/Ch.14:_2F_-_Crown_Game_(1)?oldid=149183"
Community content is available under CC-BY-SA unless otherwise noted.