2F - Yu Han Sung's Examination (3): This is the thirteenth chapter of Volume 1 of Tower of God. It follows several teams as they complete the test in their own way, while in another district Rachel's team is the only one left.

Khun Aguero Agnis chastises Rak for being too rash, while Rak argues back, saying there was no better way. The bickering continues, until Yu Han Sung applauds the trio for successfully passing the test.

The director reveals the requirement for the exam, which was "opening any door within 5 minutes and exiting" despite being given 10 minutes to choose the "correct" door. Khun is outraged at how the test was conducted, but Yu Han Sung brushes it off, saying the world doesn't wait for any individual. Khun, Baam, and Rak leaves the room, but not before Yu Han Sung notices something peculiar about Khun's briefcase. Rak gloats a bit while Khun contemplates what has just happened.

The rest of the other teams are tested, each that passes does so due to some quality possessed by one of its members. Notably, the team of Hatsu, Anak and Ship Leesoo passes due to Leesoo's incredible deductive skills. Once the examination ends, Mr. Neonbag reveals himself to be an undercover agent tasked with giving each team the answer to the test. He then asks Yu Han Sung why he ordered him to give the Regulars such a big clue. Hearing this, Yu Han Sung explains his motives behind the test, which were to test the deductive skills and the pure-heartedness of the Regulars. Khun, who was undoubtedly the most intelligent Regular taking part in the test, was about to fail it due to the fact that he did not believe anyone else's words until they were proved to be true. He then goes on to say that if if he gave a cup of medicinal tea to everyone, not everyone would view it as medicinal tea. Some would view it as poison, and some would not have the courage to drink it at all.

Meanwhile, in a separate district, only three individuals remain after the survival match... 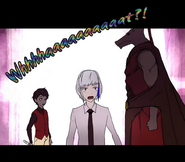 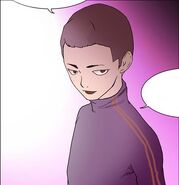 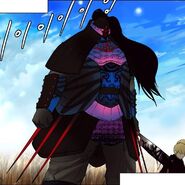 Mysterious Characters
Add a photo to this gallery

The Crown Game starts next chapter.

It is getting hot in Volume 1 at last.
Crown Game would need at least 10 chapters full of battle scenes.
It makes my head hurt. Haha.
Many seems to not recognize that the hair tied boy at the 12th chapter's beginning was Khun.
It is him, Khun Aguero Agnis.
Between family members they refer to each others with given names, outside the family name.

Yu Hang Sung's test was like resting before the Crown Game.
Time to get familiar and attached to the characters.. ^^
I try to refrain from saying 'This is an answer" in comics.
So I had a lot of thinking about it.
I took 4 hours for Yu Han Sung's last line alone.
Many people seem to think that characters in comics are all reflecting the author's voice,
but most of the times it is just the thoughts of the character and it has nothing much to do with the author.
(Of course in some cases authors talk through their characters, but in this case you will know right away due to the comic's background.)

Chuseok had to rest for some days, that made the focus on my work harder.
I will need to hold myself.
Please stay tuned for next week's Crown Game.

Retrieved from "https://towerofgod.fandom.com/wiki/Ch.13:_2F_-_Yu_Han_Sung%27s_Examination_(3)?oldid=149182"
Community content is available under CC-BY-SA unless otherwise noted.