2F - Yu Han Sung's Examination (1): This is the eleventh chapter of Volume 1 of Tower of God. It shows Lero-Ro punishing the insubordinate Regular before transitioning over to the next test being taken by Baam's team.

Lero-Ro shocks the Regular with shinsu, causing the latter incredible pain. He then tells the Regular he failed to be chosen and to return to the floor he came from. The Regular yells at Lero-Ro, telling him how much he threw away to climb the Tower, though the Ranker simply walks away to continue his conversation with Baam.

The disqualification of the Regular, on the other hand, only motivates Ship Leesoo and Serena Rinnen to try harder to get through the barrier. Khun and Rak pass through the barrier effortlessly, though Khun's Manbarondenna has a little trouble. While Khun's heading towards Baam to get ready for the next test, Lero-Ro advises Baam, that he shouldn't get too friendly with him, because he is born of a dangerous bloodline.

After Lero-Ro's test finishes, Yellow greets all of the Regulars in another room and tells them, that the next test will proceed with one team at a time. While the exam is ongoing, Mr. Neonbag speaks to Baam and Khun and gives them some hints about the test. Khun however doesn't trust him and wonders about whether or not to listen to him. A scream is heard beyond the door, and it's now Khun, Baam and Rak's turn to be tested.

They walk into a room with twelve doors, and a man sitting in the centre who welcomes them and introduces himself to be Yu Han Sung, the examiner of their test. 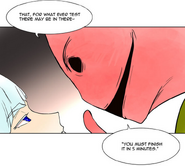 Chapters 10 and 11 are mixed up somewhat, so it will be hard to read.
But it felt so unfinished after doing chapter 10...
Perhaps I will ask for the chapters to be changed in order.
Webtoon version will be more detailed, more focused on personal emotions and situations, than Best Challenge versions.
After this, next will be the Crown Game.
The story of the Khun Family is important.
So it will be revealed little by little as the story goes.
Season 1 is mostly about the 'innocent protagonist' confused by a new world,
So there are some parts that are hard to understand and to follow.
I know it, but it is hard for a newbie author like me.
The experience is what matters in directing a comic's story. ^^
Now will be the turn for a game using brains.
I would ask all of you to read carefully and slowly. ^^
This week I worked somewhat overtime, so my wrist and eyes hurt a bit.
Gotta give my body some rest...
Luckily next chapter won't be very long. Yay!
PS.
As I said before, Yu Hang Sung's clothes are not Hanbok, it is something based on it.
PS2.
I am thankful for all comments, messages and mails.
Thanks for backing and cheering me, and sorry for not being able to answer each of you.
PS3.
This chapter is twice as hilarious when you read it carefully....

Retrieved from "https://towerofgod.fandom.com/wiki/Ch.11:_2F_-_Yu_Han_Sung%27s_Examination_(1)?oldid=149180"
Community content is available under CC-BY-SA unless otherwise noted.