2F - Lero-Ro's Test (1): This is the ninth chapter of Volume 1 of Tower of God. It follows the different teams that were formed during the last test as they are faced with a new test, which Baam passes without even trying.

The chapter starts off with the teams of Regulars having just been transported to Evankhell's carrier. All the Regulars take some time to converse and look around at the competition. Meanwhile, Ship Leesoo brags about his imaginary "Killer Arts" as Rak gets agitated because Baam and Khun still haven't let go of his hands.

The red-headed Regular that Dédé Kancho got into a fight with in the previous test grabs him and abuses him about slicing off his arm, Dédé keeps his cool and insults the red-headed Regular, which provokes him to attack, though he is held back by his teammates. Lero-Ro then enters and quells the argument by simply announcing that he is the Test Examiner. Baam thinks Lero-Ro is amazing to which Khun agrees, since he is also a Ranker.

Lero-Ro grabs the attention of all the Rankers and announces his test. He proceeds to create a barrier by compressing the shinsu in the room, knocking all of the Regulars back. Afterwards, he describes the test: each team must pass through the shinsu barrier. Surprisingly, though, Baam wasn't pushed back by Lero-Ro's barrier, and is standing in front of it, alone. Baam asks Lero-Ro if he should go through the barrier to pass the test to which Lero-Ro says no. The Ranker and several other Regulars begin to wonder what kind of monster entered the test with them... 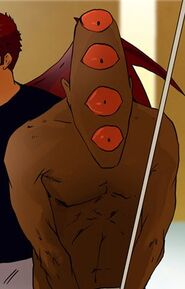 I love the Beatles.

I had some bad conditions this week, so my finished work does not look good enough to me.
I will have to pay more attention to art from now on.
This chapter and the chapter before had some trouble getting finished because of personal matters.
But I already made plans for chapters to be a bit longer.
And school begins next week, which will make me even busier... [RWF note: Not sure university or private school. Probably graduate?]
I often saw in author's comments in comic books the will to get body copies, I feel that way too.
This chapter, with all those disappointments, had lots of changes.
So I resent my work for the last minute changes, twice. Sorry to Naver managers TT [RWF note: Probably Webtoon editors?]
But still it is not good enough.....
Well, that can't be helped.
This chapter is totally different from Best Challenge, it may feel a bit boring without battles.
But if you read carefully, this will be the most interesting chapter so far. ^^
P.S. Lero-ro went through some image changes to fit his character better.

Retrieved from "https://towerofgod.fandom.com/wiki/Ch.09:_2F_-_Lero-Ro%27s_Test_(1)?oldid=143837"
Community content is available under CC-BY-SA unless otherwise noted.