2F- Evankhell's Hell (4): This is the eighth chapter of Volume 1 of Tower of God. It follows several people as the test changes from fighting to forming a team, with one of the teams being Baam, Khun, and Rak.

Rak rampages after Khun and Baam, who are hiding behind a nearby rock, demanding that they fight him. Khun looks over to his Pocket's timer to see the time limit of the test is nearly up. An announcement rings out overhead -- over the scenes of the reptilian girl and swordsman fighting and Khun and Baam smiling -- and signifies the end of the test, as well as warning the remaining Regulars that if they continue fighting they will be disqualified. This causes the girl and swordsman to immediately sheathe their weapons, much to their onlooker's relief.

The announcer goes on to congratulate the survivors and tells them the next test will be starting immediately. The rules are given: make two of the remaining participants "buddies" to form a team of three within five minutes. This appalls Khun and Baam as they realise they have to team up with Rak; the man in the jumpsuit also doesn't like the prospect of joining the two combatants he was watching. The Regulars are told they must be in physical contact with their teammates at the end of the five minutes. Khun analyses this situation as, "Make a friend out of your enemy."

In his reverie, the man in the jumpsuit reveals his name: Ship Leesoo. Ship plucks up the courage to ask the two fighters into a group, only to find the two have already made up, introducing themselves as Hatsu and Anak, and are completely oblivious of Ship's presence.

When Khun approaches Rak with the proposal of teaming up, he simply laughs at them, labelling them as mere prey. Khun retorts with the threat of killing him instead within the next minute. Just as the two are about to clash, Baam interrupts, asking Rak what the "hunt" he speaks of is. Rak explains, spurring Baam on to confront him with the ultimatum of allowing Rak to hunt him, but with his weapon cast aside. This infuriates and confounds Rak, making him more vulnerable to Khun's persuasion. However, Rak strikes out with his spear, releasing a flurry of attacks on Khun who blocks with his bag. Baam and Khun are left to resort with grabbing Rak at the last minute when the time limit is fulfilled. The spear lances towards Baam's eye, but is deflected by Khun's knife just before contact. The two then rush at the large Rak and grip onto his arm and neck, granting them access to the next test. 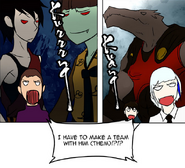 You are my prey, turtle

Khun and Baam become friends
Add a photo to this gallery

This chapter had to be cut some for the story to flow better.
I hope you appreciate it and have fun regardless if we had to cut down the content.^^

There was lots of change in the story, wasn't there ?
From now on a completely new story that was not shown in Best Challenge will be drawn.
In Best Challenge I went straight to the Crown Game in fear of the story being loose.
But I feel there will be more time to spare in Webtoon, so I am going to put things I cut out before.
I will try my best. ^^;
Many people want to see the Crown Game, that will be shown about 5~6 chapters form now on.
Rules will go through some changes, and the gameplay will change too.
Those who already found foreshadowings that I began to put in, you are geniuses.
P.S. Black March was retrieved by Rak right before the teleporting.

Retrieved from "https://towerofgod.fandom.com/wiki/Ch.08:_2F_-_Evankhell%27s_Hell_(4)?oldid=152919"
Community content is available under CC-BY-SA unless otherwise noted.