1F- Headon's Floor (4): This is the fourth chapter of Volume 1 of Tower of God. It follows Baam as he finished Headon's test, taking the Black March with him to the next floor.

After stabbing the ball, Baam notices that it makes no difference, as the ball doesn't pop. Yuri questions Headon whether he intended on forcing Baam to give up or not and yells at Baam to stop taking the test. He refuses and continues his attempts to pop the Ball, even to the point of breaking his cleaver.

After a while, the White Steel Eel regains consciousness and begins its attack again. Yuri moves to drag Baam out of the area, but Evan suggests another way: begging Black March to ignite. Yuri, who can't ignite Black March herself, is dubious of the method. The black March is noted as a tomboy that is difficult to handle, but Evan believes in Baam. Baam closes his eyes and starts begging the Black March for help in climbing the tower.

Baam meets with Black March, who takes the form of a young woman with long flowing blond hair and pointy ears. The Black March asks him why he's climbing the Tower, whether it is for money, power, or glory. Baam says he's climbing to find Rachel, which prompts Black March to wonder who or what Rachel is. However, Baam clarifies that Rachel is his old friend, she is as marvellous as precious jewels or the most beautiful girl in the world. Rachel is a tomboy, who makes jokes and can be deceitful, but she is someone precious to him. And if he finds her, he does not need to climb the tower anymore. The Black March claims he is boring, but she accepts his request nonetheless, also noting that she likes Baam's face.

Black March ignites, much to Yuri's surprise and annoyance, prompting her to exclaim that Black March is sexist, preferring cute boys to other women. However, the situation seems to go out of control as the Ball absorbs Baam before making him disappear. Yuri in shock asks Headon what happened to Baam, with answering that Baam got what he wanted since he passed the test and reached the next floor. However, he left with the Black March, and now Yuri and Evan have to find Baam and reclaim the Needle.

After they leave, Headon, seemingly alone, makes a few short statements (though we find out later on that he is actually talking to Rachel). Meanwhile, Yuri is stomping off angry at Headon for forcing her to go after Baam and at Black March for running away with a stranger, but she notices Evan being silent and asks him what he is thinking about. Evan reveals that he has been thinking about Baam and whether he was like Baam when he entered the Tower, which Yuri jokingly responds with him looking different. Evan continues with openly pondering if Baam will change, as there are many things in the Tower that can distract him from his pursuit of Rachel. Evan reveals that he no longer remembers why he entered the Tower anymore and asks if Baam will change like this too. Baam will change and become just like us. Yuri puts Evan in a chokehold asking what he means by “us” before asking where Baam went. After recovering from the chokehold, he responds by saying that Baam most likely went to the Evankhell’s Floor. Yuri says that Evankhell’s Floor is a bit dangerous, but that does not stop her. They have to break into the floor as they are not allowed there, but before they leave for Evankhell’s Floor Yuri tells Evan that he has not changed. Not wanting to leave on a sombre note, Yuri makes fun of him for being short, something he is naturally as a Silver Dwarf. 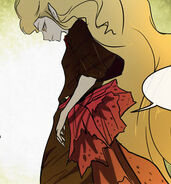 Baam explodes the ball
Add a photo to this gallery

1F has ended.
I had planned to end this Floor quickly, so I am happy that I managed to finish it.
The reason Tower of God is longer than most Webtoons is because of its story directing, and it began only a few weeks ago.
Fantasies that are so far from normal life, like the Tower of God would need a firm beginning so that the readers understand the story later.
(It will be shorter from 2F on, though I will lengthen it when I feel it is needed.)
Personally I don't think that length of work isn't equal to the quality of work.
Each comic has its own length.
Next chapter Rak and Khun will finally show up.
Sorry to those who already did read Tower of God before, but 2F will undergo many changes. ^^

Retrieved from "https://towerofgod.fandom.com/wiki/Ch.04:_1F_-_Headon%27s_Floor_(4)?oldid=145934"
Community content is available under CC-BY-SA unless otherwise noted.