Tower of God Wiki
Register
Don't have an account?
Sign In
Advertisement
in: Part I, Chapter, Headon's Floor
English

Episode 1
1F - Headon's Floor (3): This is the third chapter of the Volume 1 of Tower of God. It shows Baam trying to finish the test given to him by Headon, with him getting to the ball, but Baam is not able to pop it.

Baam remembers back to when he was in a cavern, where Rachel was his star. She taught him how to speak, about the outer world, the warmth of humans, and she gave him a reason to live. Since he was born, he had lived in darkness, never knowing how laying beneath a night sky. However, when he met Rachel the darkness above became a beautiful night sky. Thinking about this gives him the resolve he needs to face the White Steel Eel, as he fears to lose Rachel more than death.

As Yuri and Evan watches on, Yuri asks Evan whether Baam can win. Evan responds by saying the difference in strength between Baam and the eel is too big and Baam can only hope for a miracle. He deduces that Baam could beat the Eel by letting it eat him and then stabbing it in the tongue, but to do so a person would have to be completely insane. Evan does not share this insight as even if he told Baam about this solution it would not change anything since you need an extreme resolve to go through with such a plan. It is obvious to Evan that Baam would just try to outrun the eel, yet Baam actually lets the Eel swallow him, much to Evan and Yuri's surprise. Yuri tries to go and save him, but Evan stops her, telling her that this is the solution. Baam manages to stun the Eel, run towards the Ball, and then stab it.

Yuri seeing the absurd solution to the task asks Headon whether the real purpose of the Test was to see if Baam had the courage, determination, and judgment needed to climb the Tower, to which Headon replies that it could be interpreted that way. However, when Baam stabs the Ball with the Black March, it does not pop. Worse yet, the Eel is recovering. Yuri is distressed by this and frantically asks Headon what on earth he's doing, which Ball would not pop to the Black March. Headon just smirks and replies, "it's a very well-made Ball".

Baam having a flashback 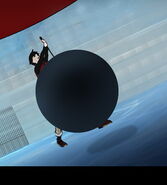 Just as I expected.
Headon's haters population rocketed.
Strange being, Headon is.
It is hard to know what is in its mind.
[RWF Note: I am using 'it' for Headon because SIU has not made clear if Guardians have genders at all.]
Sometimes it is like an angel, sometimes like a devil.
That is why I like this character so much.
Next chapter will be the end of 1st Floor, with about 90 cuts, and 2nd Floor will begin the chapter after that.
Something new will be added, hope you don't miss it.^^