Tower of God Wiki
Register
Don't have an account?
Sign In
Advertisement
in: Characters, Males, Canine People,
and 2 more
English

Butler (버틀러) was the butler of Baylord Yama.[1] He was first seen reporting to Yama in The Cage at the executive pool about the incoming Madoraco's Ghost Ship.. [2] Later, he was killed by Tall, one of Baylord Paul's executive.

Butler is a muscular mutt and dutifully served Baylord Yama. He has a long scar on his left eye that seems to be caused by a sword or knife slash. He wears steel armor that looks quite similiar to that of a gladiator suit. 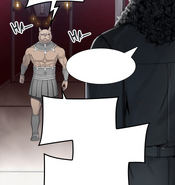 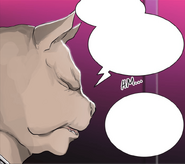 When Karaka ordered Madoraco to contact Slayer Baylord Yama in order to help him to fight Kallavan, Madoraco was hesitating that Yama would want to help them. But in the end, Madoraco ended up agreed to contact Yama because he really wanted the Soul-Stirring Ladle. [3] After two years of climbing the tower from the battlefield against Kallavan's 4th Corp at the 49th Floor, Madoraco's Ghost Ship finally reach the 52nd Floor. It seems that Madoraco and Yama made an agreement to meet on this floor. After Madoraco's Ghost Ship and The Cage finally encountered each other in close distance, this is where Yama's Butler first appeared and was seen reporting to Yama about the ghost ship.[2]

He dies by the hand of Tall while protecting Baylord Yama's room.