Bulgasario is an E-rank Regular who participated in the Workshop Battle and was chosen to go in the first round of the Plug Battle event where Ja Wangnan, Hon Akraptor, Prince, and Yeo Miseng also participated in.

He seems to be friend with a regular named Leg because he wants to cooperate with him to win the battle. He was violently defeated and eliminated with just a single bat stick swing by Miseng who's physical strength was enhanced and under control of Verdi's special flower that can unlocks power potential of a person.[1]

Similar to regular Leg, he is pretty confident to win the fight and tends to look down on the enemy if they look weaker than him. 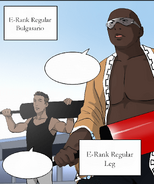