He is one of the three Mad Dogs that Baylord Yama sent to climb the Tower. He says he has some history with Varagarv.[1]

Buelsar has pale skin, thin, dark eyebrows, and short purple hair. Usually, he has black, slit-formed pupils with no visible iris; however, his eyes can glow in an orange light if he fights at full power. He carries around a huge weapon that resembles an oversized jousting lance; he keeps it fastened to his back via a brown strap when he is not wielding it.

He is generally quite confident in his abilities. However, for the most part, he appears to be the silent, observing type. 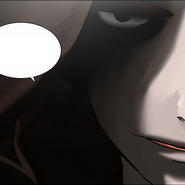 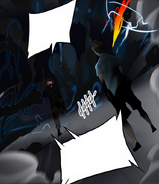 Charging at Viole
Add a photo to this gallery

He appeared along with the rest of Rachel's allies as they discussed their plans.

Buelsar arrived at Train City with the rest of his allies and bantered with Angel about her incessant hunger issues. Later on, he stands silently as the tournament details are announced for all the Regulars at Train City.

When the group went to the Entrance floor and encountered Mirotic, Buelsar stood and observed silently as Daniel took on the guardian by himself. In the aftermath of a clash of blasts between Daniel and Mirotic, causing Angel to vent about Daniel, Mad Dog noted to her that Mirotic had vanished. Daniel then explained about his remote and eventually, the group opened the gate where the group then traveled up the spiral stairs to the platform where the real Hell Express resided.

The group met Poro Poe who introduced himself and told them they would leave once Ha Yura arrived. After a loud noise was heard below, Angel and Daniel went below to investigate. Yura then arrived at the platform just before Koon, Wangnan, and Yihwa appeared from the elevator Poe had come out from. After some conversation between Koon and Rachel, Koon engaged Rachel, the other two took on Cassano, Yura began her ascent up the stairs to enter the train and the Mad Dog watched on wondering whether he should get involved.

Eventually, Daniel and Angel reappeared with Viole following close behind. After Baam and Rachel saw each other, Rachel apathetically blew him off, causing Baam to become dangerously frustrated and make the Thorn begin going out of control. As Rachel's allies then began to make their escape, with the Mad Dog repelling Wangnan and Yihwa with a powerful swing of his weapon, Daniel was struck from behind by a crushing blow from Baam whilst trying to escort Rachel. With Daniel floored, the Mad Dog began to attack Baam and the two fought, with Baam on the offensive and gaining the upper hand. However, their fight is cut short when Angel hauls Buelsar away so they could escape into the Hell Train.

Buelsar was seen finishing off one of the train guardians with Daniel doing the same. He noted that Daniel had recovered fully and then confirmed he could feel 'his' presence already. Later on, after reaching the room where Hoaqin was being sealed, he helped to take down Bloomer guardian (with some direction and help from Hwa Ryun). Buelsar then witnessed Hoaqin's entrance and introduced himself as one of Baylord Yama's Mad Dogs. He and the rest of the group moved out, following Hoaqin, and then helped in completing the 36th Floor stage test on the Hell Train.

Mad Dog and Angel were tasked with keeping an eye on Ja Wangnan and Yeon Yihwa.

When the train came under fire, he and Angel went out to see what the problem was. However, they were soon teleported elsewhere within the train, confusing them. They then decided to get on their way and meet up with their allies eventually.

He and Angel eventually encountered Rak, Bero Bero, and her team and quickly began fighting with them. However, they were stopped with the arrival of Vicente who chided their actions. Mad Dog then asked why Vicente was with Ja Wangnan and Yeon Yihwa, with Angel adding they were enemies, but Vicente instead defended the two and threatened Mad Dog and Angel. However, before anything could come of it, Hoaqin arrived and contently reunited with his sibling. The two siblings conversed briefly before clashing, with Hoaqin telling them to attack; Mad Dog killed one of Bero Bero's teammates during this time. However, due to the actions of Wangnan and Yihwa, their enemies escaped much to Hoaqin's great annoyance.

A month later, he and the rest of the group arrived at the 4th stage well in time for the game to begin.

Mad Dog participated in the first round of the Dallar Show alongside Rachel in the game, "Catching the sweetfish". Despite the aim of the game is to catch the sweetfish, Bero Bero was focused solely on attacking him so Mad Dog defended himself. By the time the round had ended, Team Hoaqin had lost.

In the second round game, "Transferring the sweetfish", he was partnered with Angel. They eventually encountered Bero Bero, Yihwa and Hongjo and readied to attack but were slowed by a blast of fire from Yihwa. As Bero's team went bouncing around the room, Buelsar wondered who to attack first. Just then, Jyu Viole Grace and his team entered the room behind him much to the Mad Dog's acknowledgment. Buelsar noted his luck to have encountered Viole but Moontari challenged him instead. Initially surprised by Moontari's skill, Buelsar started getting excited and began to get serious, unveiling his ability, "Hell in a Cell". He and Moontari then started fighting intensely but after some chatter from the latter, Buelsar ended up brutally bisecting Moontari. Challenging Viole to battle, he was impressed when the latter shattered his shinsoo chains. The two began to fight with Viole landing a powerful blow that sent Mad Dog flying backward. With Buelsar excited that he'd be able to fight all out, he drew out his full strength and attacked Viole. However, Viole exhibited incredible power, subsequently defeating the Mad Dog. Having been defeated and disqualified from the Dallar Show, Buelsar decided to inform Viole of who Hoaqin really was: the former FUG Slayer, "White".

Buelsar participated as a hostage during the final round of the Dallar Show called, "Go To Hell". In this game, hostages from each team would be used and the two leaders, Hoaqin and Jyu Viole Grace, would use their dallars to either save or forsake the lives of their hostages. Buelsar Elliot was the hostage during the second turn of the game, being saved by Jyu Viole Grace. He, along with Angel, was later taken by Chang Blarode.

Buelsar Elliot is a powerful D-rank Regular who is quite confident in his abilities. At Train City, he was able to fend off Viole's attacks whilst the latter's powers were being augmented by the Thorn without fighting at his best;[1][2] however he did say that if he didn't get serious, Viole would end up killing him.[1] Later on, during the Dallar Show, he was also able to combat the vengeance-fuelled Bero Bero without even breaking a sweat.[3] In the second round of the Dallar Show, Buelsar proved to be more than a match for Moontari, a strong opponent who had previous experience on the Hell Express, and was even able to kill the latter, despite still not fighting at full strength.[4] However, even at full strength, he was soundly defeated by Viole in their most recent fight.[5] Buelsar Elliot is a self-proclaimed "Mad Dog of struggle" and states that he gets stronger the stronger his enemy is.[5] In this state, his eyes glow red and he coats his weapon in a torrent of dark-colored, violent looking shinsoo.[5]

He fights using an oversized drill-like spear that he can coat in a torrent of shinsoo, enhancing the power and range of his swings and attacks.[1][2][6] It is quite durable being able to endure a powerful strike from a Thorn-augmented Viole, which left only a dent in it.[1]

Hell in a Cell:[8] It is a special ability that was granted to Buelsar by his master. He generates a multitude of large metallic shinsoo chains around him and his opponent(s); they will only disappear if he is killed.[8] However, it appears a sufficiently stronger presence than Buelsar can break the chains through a sheer release of power.[5]

Retrieved from "https://towerofgod.fandom.com/wiki/Buelsar_Elliot?oldid=124882"
Community content is available under CC-BY-SA unless otherwise noted.