Bongso is a Regular and a Level 4 Supervisor in a Dog Shelter on 52nd Floor.[1] He was last seen being knocked down by Baam with 3 Baangs and laying on the ground unconscious.[2] 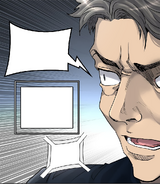 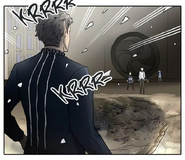 Bongso has quite a strong body because he was able to survive the Shinsu Bomb effect.[2]

Partial Transformation: Like other canines' power in general, Bongso also capable to do a partial transformation. Bongso transformation power is a powerful claw slash. The power is actually quite powerful as he was able to destroy the grounds where Baam stand. But the power wasn't able to touch and hurt Baam.[1]