Blood Eye Paint is a symbol of rebels towards Zahard Empire that was used by White's followers. It was inspired by the red blood marks next to White's eyes.[1]

Back when White first made his reputation in the Tower, White's followers used to paint blood next to their eyes to look like him. And for a while it become the symbol of rebels throughout the Tower.[1] 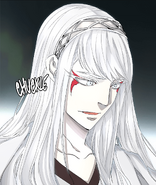