Black March (검은 삼월, 검은 三月, Geomeun Sahmwol; "Black Third Moon") is a B-rank Needle and Ignition Weapon lent to Baam for a short time by Yuri Zahard. Since then it has changed hands a few times, going from Baam to Anak Zahard, then back to Yuri, before she gave it back to Baam.

The Black March is considered a top grade Needle, although it is not the most powerful one - in fact, it's not even the greatest weapon in Yuri's possession, although it's the most symbolically significant along with her recently acquired Green April. Black March is one of the 13 Month Series made by the craftsmaster, Ashul Edwaru. The weapon is sentient and has a spirit inside it and when ignited, it is capable of unleashing extreme power like the other 13 Month Series.[1]

As a weapon, it is a jet black needle that is extremely thin with a slightly thicker handle. On the handle "Black March" is embroidered in cursive.

When Ignited, Black March comes to life. It assumes the appearance of a young lady with golden hair and pointed ears dressed in an elaborate red gown. It has the ability to communicate with its user and others who have used it before.[2][3] The needle is sexist as it prefers handsome males over other categories; it works neither for Yuri nor Anak[3] whom are both female users but instead works for Baam because his face is "just her type".[2] It also rejected Leesoo.[3] Like Green April, it considers Yuri Zahard to be somewhat of an idiot.

Black March during her meeting with Baam 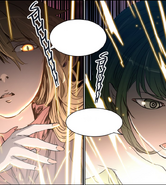 Black March was given to Baam by Yuri so that he could pass Headon's test. He first used Black March to stab a Steel Eel in it's tongue and then stabbed her into a Ball. When the Ball did not pop, he ignited Black March and, since she thought he was cute, she decided to help him, much to Yuri's annoyance. She was then teleported to the Second Floor with Baam.

Baam used Black March to fight on the Second Floor, but ended up losing her to Anak in the Crown Game. Anak (and Leesoo) was later seen trying to ignite Black March, but she refused to do so. Ren undertook a mission to retrieve the Black March, Green April and to kill Anak Zahard. In the end, Yuri Zahard ended up with both of the 13 Month Series weapons.

Yuri is in posession of the Black March for most of volume 2, but rarely uses it in combat, preferring using her fists in fights in most fights. The reason for this is probably that she has not been able to ignite the Black March before and it is not her most powerful weapon when it is not ignited. She first uses it in volume 2 against Hell Joe, where she able to ignite both the black march and green april at the same time. However, this lead to the Ghost of the 13 Months taking over her body, where she barely escapes from the ghosts control. After having ignited Black March once, she seems more confident in using it in combat. Later using both the black march and green april in her second fight against Karaka at the last station.

Black March was given to Baam by Yuri in order to help him in his fight against the ranker Charlie. Black March shows interest in Baam as she did on Headon's floor. She says that she felt his, the "berserker boy's", presence on the floor of death. She complements his guts for holding back against a ranker and says she likes his eyes. She says she can extend his powers and ignites. Bam proceeds to destroy the inventory Great Whaley in one hit with the Black March. Baam uses Black March to protect against attacks from the high ranker Ari Bright Sharon. When Baam got pushed into a corner by the Vice Alter Director he stabbed himself with Black March. This gave the Black March the form of a black shinsoo thorn fragment, which he transformed into a big black shinsoo needle.

Bam has yet to use the Black March in the third volume, since Evankhell wanted him to train his basics and stop relying so much on the Black March's power.

Retrieved from "https://towerofgod.fandom.com/wiki/Black_March?oldid=111171"
Community content is available under CC-BY-SA unless otherwise noted.