Berdych is tall and muscular. She is light skinned and has brown eyes with long brownish gray hair. 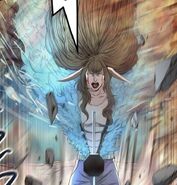 Berdych's Stage 4 transformation.
Add a photo to this gallery

She is quickly defeated by Gado before she is able to raise her guard.

She is brought back from the brink of death by Khun Aguero Agnis and decides to help them fight the ranker that threatens them.

She is blown away by Baylord Doom's attack.

After being blown away by Baylord Doom she returns to protect Khun Aguero Agnis from the rankers and High rankers.

She alongside Khun Aguero Agnis defeats the ranker sent by Baylord Paul.

She was noted by Gado to be quite strong and she only went down easily because she was taken down by surprise.

Berdych has Partial Transformation abilities like other combat canines:

Retrieved from "https://towerofgod.fandom.com/wiki/Berdych?oldid=118641"
Community content is available under CC-BY-SA unless otherwise noted.