Beniamino Cassano (베니아미노 카사노, Beniamino Kasano) is a human Regular and living Ignition Weapon. He is sometimes referred to by his epithet "Devil of the Right Arm". He was formerly a member of the now disbanded Team FUG.

Beniamino Cassano (No.99) and Beniamino Ilmar (No.21), a.k.a. Kang Horyang, began their lives as children abandoned in the Middle Area and sold to the Workshop, where they were raised and experimented on. He and Horyang were the only two survivors out of 99,999 test subjects; at age 12 they were injected with a substance/creature known as a "devil", and became the first pair of living Ignition Weapons.[1] After he was separated from Ilmar, he somehow became a Regular, climbed up the Tower and went to live in the Hand of Arlen.

Cassano wears elegant yet somewhat tattered brown robes. He is smaller and thinner than his "brother" Kang Horyang, with a similar hairstyle in a lighter shade of brown. He also has a wing similar to Horyang's, but on the left side and positioned facing down.

As a child, Cassano was confident and optimistic, and acted as a "big brother" to Horyang. Since becoming a Regular, he has remained confident, but has become far more quiet and sullen.

Cassano as a child 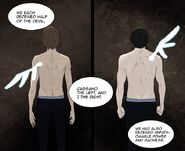 Receiving half of the devil with Ilmar

Cassano first appears in a photo containing his image, which someone posted on Box for anyone to see. It was initially believed that he deliberately let himself get pictured in order to send a message to Horyang, but it is later revealed that FUG was using him as bait to draw in Koon.

When alerted of Horyang's presence in the Hand of Arlen, he used an Observer to guide Horyang to his location, then proceeded to attack Ran and Novick, who had been following Horyang. He initially overpowered the two, but was hit by a powerful attack from Ran, which Ran claims to have definitely killed him.

Enraged at Ran and Novick, Horyang engaged in battle against them. In the middle of this battle, Cassano emerged from the rubble, showing that he survived Ran's attack, and proceeded to wound Horyang in order to anger Viole, who had just arrived. He then hid himself throughout the fight between Viole against Novick and Ran, but came out again when Xia Xia explained their motive and FUG's part in the incident. He picked up Horyang and left the Hand in a golem with Xia and Viole.

He initially attempted to fight Novick and Ran, who had hitched a ride on the golem, but was stopped by Viole.

When Horyang woke in an FUG headquarters, Cassano appeared before him. Horyang attempted to attack him but Cassano said that Sophia was waiting for them in the Gong Bang. The two then joined Viole's team and passed the 29th Floor.

Cassano guarded FUG's residence from intruding Regulars until he was attacked by Hatsu. The two of them fought and Cassano reminded Hatsu that he had beaten him in the past and that sword attacks could not harm him. However, his opponent quickly demonstrated that his blade could indeed cut Cassano. Cassano fought ferociously, but was overwhelmed by Hatsu's speed and sword techniques. After defeating him, Hatsu asked Cassano why he was working for FUG, but was distracted by an explosion nearby. Cassano used this opportunity to smash Hatsu's sword and shoot him with a Light Bullet, sending him up to Archimedes.

Aboard the Archimedes, he went to the Acorn Workshop with Horyang to meet Sophia. He then catches Hatsu spying on them and proceeds to lock Hatsu in a cell. He is then introduced to Beta and told about Emile.

After winning his round along with Yuto, he was informed by Sophia that Beta was on the loose and went to apprehend him. It was revealed later on that Cassano had freed Beta himself.

He converses with Beta briefly before Beta begins his rampage.

After Hwa Ryun, Novick and Horyang had fled from Ron Mei and Varagarv, he helped Reflejo in subduing them before leaving and cutting his ties with FUG. Soon after he is seen conversing with Madoraco about a deal to take Emile. Later on as he goes to retrieve Emile, he is happened upon by the Traveller, whereupon he reveals Emile's history to him. He then proceeds to leave, telling the Traveller that he would use Emile's power to change the Tower.

As the volume ends, he and Traveller are seen meeting with Rachel in an abandoned castle. Rachel asks whether he brought "it", which he confirms. Michael then asks him whether it's the real thing which he confirms again. Rachel praises his good work, then tells them all it was time to save the Tower.

Cassano was seen standing next to Rachel as they observed the Traveller looking at Emile's tank form.

He arrived at Train City with the rest of Rachel's group but stayed silent for most of their appearance.

Later on, when the entered the guardian's room and encountered Mirotic he watched silently as Daniel battled the guardian. He remained silent when Daniel asked him if he could defeat an illusion. Eventually, after Daniel turned off the Mirotic, they passed through and were led to the Hell Express by a red mechanical bird. He was silent when Daniel's associate, Poro Poe, arrived and told them they would leave once Ha Yura arrived.

Ha Yura eventually arrived at the platform but, just then, Koon, Wangnan and Yeon Yihwa appeared from the far elevator. With Koon announcing their arrival and then attacking Rachel, Cassano was then attacked by Wangnan's special bomb which left surprising damage. Wangnan revealed he was using a special "Antimatter Bomb" and then explained its origin and purpose causing Cassano to get a little more serious. However before Cassano could retaliate he was forced to block a large blast of Yihwa's flames. Cassano noted Yihwa's presence whilst the two continued their offence by attacking with a combination attack that ended with a large volume of Yihwa's flames erupting from underneath him. With Cassano coming out relatively unscathed and his left arm Ignited, he and Wangnan conversed about various topics before Cassano then Ignited his right arm and began attacking Wangnan and Yihwa with powerful blasts. However their battle was interrupted when Viole started losing control and Angel and the Mad Dog came to retrieve him so they could escape. Getting on top of Angel's metalfish he, the Mad Dog, Traveller and an unconscious Hwa Ryun managed to reach the Hell Train door and the enter inside.

He was then seen walking down "Revolution Road" with the rest of Rachel's group with Hwa Ryun hauled over his shoulder.

He was briefly seen after Daniel and the Mad Dog had finished defeating the train's guardians, as well as when their group released Hoaqin's first part. He was with the team when they completed the 36th Floor stage test of the Hell Train.

Cassano was one of those who noticed the train coming under attack.

Cassano was with the others when they found Vicente's room empty.

He stood silently as Hoaqin nonchalantly berated Rachel for her poor performance in the first round of the Dallar Show. In the second round, he and Traveller traversed the pipes until they ran into Koon's group. Sandwiching them with Rachel and Ha Yura on the other side, Cassano prepared to attack until Rak interceded. However before Cassano could really get serious Cherry La put him in a tight spot by trapping Traveller. Koon then decided to have a wager with Rachel to settle it all, which she agreed upon. Rachel ended up losing the wager, causing Cassano to lose all his dallars are get disqualified.

Cassano was present as their group successfully cleared the 38F stage test of the train.

He and Traveller encountered Ja Wangnan and engaged him. Wangnan revealed his intentions to bring Cassano back before attacking him with shinsoo bombs and injecting him with a special fluid that would eventually paralyse him. Cassano whaled on Wangnan, beating him to an inch of his life before he started to feel the effects of the fluid. At that, Hon Akraptor appeared and blasted him down, allowing the man to capture Cassano in a specially made pocket ball.

Later, having been freed, Cassano frustratedly asked Hoaqin why he wasn't informed of the planned trap with the latter telling him to stop complaining and expressing his disappointment. Hoaqin then matter-of-factly chastises Cassano's apparent shortcomings, before telling him to get rid of his emotions if he didn't want to be thrown away by FUG.

As a fellow living Ignition Weapon (and possessor of the other half of the Devil), Cassano's powers are similar to Horyang's, although he uses them differently; his Ignition Weapon comprises his left arm instead of the right and he seems to rely more on speed rather than power. He is able to use his arm to fire short range bursts, which can be used either to attack enemies or propel himself around.[2][3] He is also highly resilient, able to resist sword cuts from Hatsu[3] and survive a powerful eruption of fire from Yihwa relatively unscathed (albeit she was holding back).[4][5] When Ignited, his arm is capable of incredible power, capable of shattering metal in a single blow.[6] He was also able to miraculously survive being impaled by Espada de la Luz which should normally kill a person hit directly by it.[2] Cassano was also able to defeat Novick and Horyang, with the help of Reflejo,[7] which is an impressive feat considering one of them was a Top 10 E-rank Regular and the other was the same kind of Ignition Weapon as Cassano.

Complete Ignition Weapon: After Cassano stole Horyang's 'Devil part' he is believed to have become a complete Ignition Weapon, similar to Beta.[8] However unlike Beta's unstable version, which is made up of many separate 'devils', Cassano's is a much more complete and stable version that only has one 'Devil'. Beta even theorised that Cassano may be currently stronger than himself and maybe even Viole as a result.[8] In this state Cassano is able to freely Ignite either arm and can use their abilities. He has shown the ability to fire extremely powerful shinsoo blasts from his right arm.[9][10] However Cassano is unable to to completely control his new power yet and still needs time to master it.[9]

Kang Horyang: He describes Cassano as his only childhood friend. The two of them were raised together by and experimented on by the Workshop.[1] They were separated just before Horyang was chosen by Headon to enter the Inner Tower as a Regular.

Sophia Amae: She was Cassano and Horyang's teacher until the age of 12, when they were given the halves of the "devil", after which time they never saw her again. Horyang describes her as their first love.

Retrieved from "https://towerofgod.fandom.com/wiki/Beniamino_Cassano?oldid=114590"
Community content is available under CC-BY-SA unless otherwise noted.