Bel Berhino (벨 베르히노, Bel Beleuhino) is a D-rank Regular that fought against Team Tangsooyook with the rest of his team during the 35th Floor test. He is from the branch family of one of the 10 Great Families and also has some Hendo Family blood in him.[1]

Bel Berhino is a Regular that has been trying the test for the 35th Floor for dozens of years. When all the strong Regulars took off on the Train, he believed it was his chance to ascend to the next Floor.[2]

He appears to be extremely cocky and believed that Tangsooyook were a bunch of pushovers as well as calling Rak a "cute gator". 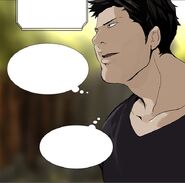 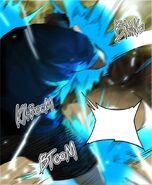 He was part of the team that challenged Team Tangsooyook on the 35th Floor test. He also taunted Rak before the test began.

When the test began Berhino was extremely confident of his team's chances. It came as a major surprise to him when he realized Walkin had been taken out and he decided to go through the path himself. Berhino quickly encountered Baam and, after angrily shouted at him for taking down Walkin, he charged into attack whilst withstanding two Shinsu blasts from Baam. However, as soon as Berhino got close, he was mercilessly taken out by a rapid two-hit attack from Baam that also destroyed the ground behind the strike.

Berhino must possess a fair amount of power since he is a D-rank Regular. However, considering he has challenged the 35th Floor test for dozens of years and failed to pass, he probably isn't the strongest. He does have relatively high Shinsu Resistance, due to possessing some Hendo Family blood in him,[1] and can resist strong Shinsu attacks.