He likes to be a bossy leader and tend to look down on others. He is usually rude but can be nice and kind at the same time. He consider canine people as his disposable troops or army that he can use anytime as he pleases. 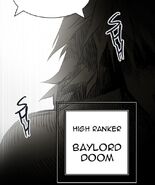 Doom was the oldest of the three Baylord siblings and their leader due to his natural talent in leadership. He eventually discovered a special power to make other humans canine people as well and used it to create the Cage, composed entirely of canine people. Doom was eventually recruited by FUG due to their desire to make Doom and his army theirs. However, Yama refused to follow him and challenged him and Paul. Although Yama himself noted it was a brutal fight, Doom and Paul were defeated. However, Yama was unable to kill Doom as otherwise all the transformation power of the canine people would be lost and thus he chose to seal him away instead, ripping out his heart to keep him in a slumber. Doom's unique power was used by Yama to expand the clan after Yama became a Slayer.

Baylord Doom, who was sealed under the fang in the Cage, was awaken using Deng Deng's Heart.

After waking up, he came down to where Khun and Rak were.

Doom was noted to be one of the Top 200 Rankers in his prime and Yama noted he was on a different level than Baylord Paul and the toughest challenge to him when he fought them both for leadership of the clan, with Doom seemingly able to fight Yama to a stalemate enough to force him to use his completed transformation to defeat him. Even in a weakened state, Yama noted Baam and Karaka would be no match for him.

Hairy Shinheuh: Doom is able to summon a hairy shinheuh that assists him during fights, in addition to the shinheuh's combat abilities, also It has a fast regeneration and will always protect Doom independent of the enemy.

Partial Transformation: Doom was born with this mysterious power that allows him to enlarge his body parts and add canine characteristics to them and also he can share this power with ordinary people. He can further progress this transformation. It is not known how many transformations he can undergo, but it is known that he can use up to Level Six.

Retrieved from "https://towerofgod.fandom.com/wiki/Baylord_Doom?oldid=120766"
Community content is available under CC-BY-SA unless otherwise noted.