Batis (배티스, Baetiseu) is a Data Humans in the Hidden Floor and a best-friend of the data version of a young Yu Han Sung. He is a data-generated human, so he is not a real data of a person in the Tower. He was a former Wandering Minstrel who decided to rebel against Big Breeder after he found out about the real truth of the system.[1]

Batis wears armor on the upper body and a helmet. His mouth was mutiliated as part of punishment from a Big Breeder. He also has a scar across forhead and left eye. Batis deeply cares about his daughter Medley and carries her all around, apparently even though he knew she wasn't his real daughter. For data Yu Han Sung, he felt like a true 'human being'.[2]
For combat he uses a rifle. 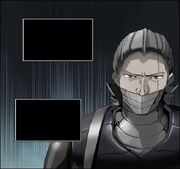 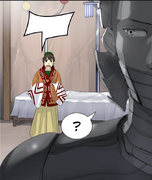 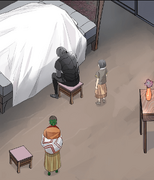 Batis sad
Add a photo to this gallery

When Batis was a Wandering Minstrel, he witnessed the wrongdoings of a Big Breeder, who he was supposed to praise. Batis created a song to expose them and his singing led to other data humans remembering buried memories and going against the Big Breeders. This rebellion was quickly thwarted and Batis was punished severly. To prevent him from singing his mouth was mutiliated, which caused permanent stuttering.[1]

Retrieved from "https://towerofgod.fandom.com/wiki/Batis?oldid=142827"
Community content is available under CC-BY-SA unless otherwise noted.