Originally, there were twelve warriors who accompanied Zahard during his climb of the Tower, and Arlen was one of them. As she climbed the Tower, she and another hidden Irregular, V, fell in love, and the two began a relationship.[1]

At the end of the great journey, Zahard announced that he would stop climbing the Tower and become King. V and Arlen, who wanted to keep climbing the Tower, criticized Zahard's decision, as they believed that Zahard was blinded by falsehoods. Despite their protests, Zahard became the King by making a deal with the Guardians.[1]

Soon after that, Arlen refused Zahard's marriage proposal and ran away with V. The two of them then formed an organisation to oppose Zahard with the main goal of liberating the Key in his possession, which was necessary. This erupted into a civil war among the former companions, where the 10 Great Warriors sided with Zahard. Arlen and V ultimately lost the war, which forced them into hiding as fugitives. At some point, Arlen Grace had a child, but this was the last straw for Zahard, who had earlier been willing to allow her to stay alive in exile, and he tracked her down in utter rage over Arlen having never returned his feelings and hating him, this then led to the events of him brutally murdering the child right in front of her.[1]

Because of the trauma of that incident, along with the grief over losing her child, Arlen attempted suicide multiple times. But she was already incapable of dying due to the immortality contract. Depressed overseeing his wife in such a state, V, who didn't have an immortality contract like the rest of Zahard's companions, eventually took his own life in order to "save" Arlen from her continued suffering, with hopes that she could return to their former companions if he was no more. Before dying, he wrote a note telling her to forget everything and to go back to their companions in hopes she could find some semblance of normality. However, Arlen's hatred towards Zahard was already too great, and the death of V apparently only further made her more bitter. She preserved her child's body using a mysterious spell and wandered for some time, in search of a way out of the Tower so she can resurrect her child. She eventually found one.[1]

She offered her child to the God outside of the Tower with hopes that the God's power would return the child to life. She further prophesied that the child would return to the Tower, obtain the Thorn that would be left behind by the God's messenger, take revenge on those who caused her suffering, and ultimately lead the people of the Tower to greater heights.[1] It is unknown what happened to her afterwards.

While not much is known about her personality at the present, Po Bidau Gustang mentioned that she got along with everyone, which complemented his more aloof nature. 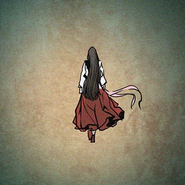 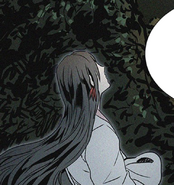 It is said that she had the ability to use mysterious spells. One of the spells she used was able to preserve the body of her child for a very long time.[1] She also appeared to be knowledgeable in manipulating spirits as seen with her former possession of the Bell of Dawn.

Retrieved from "https://towerofgod.fandom.com/wiki/Arlen_Grace?oldid=151678"
Community content is available under CC-BY-SA unless otherwise noted.