Arie Swordsmanship is a powerful Sword technique of the Arie Family. The Arie Family is very well known for its use of Swords and their unique sword techniques, which makes it possible to use swords in the very dense Shinsu common on higher floors.

Arie Swordsmanship has no blind spots and there are no good techniques to counteract this style.[3][4] The sword attack can somewhat disappear and then reappear within seconds, this is because the sword attacks are Teleporting across dimensional space in the Tower.[2][5]The sword attack will suddenly appear from behind the target's body, or even sometimes from all direction.[6][7] Because of its random behavior, Arie's Swordsmanship is very unpredictable.[8]

The only way to definitively overcome a user of Arie Swordsmanship is to either overpower them with sheer force, attack them before they are ready to attack or be better at Arie swordsmanship than them.[4]

Arie Swordsmanship is taught only to selected main family members (Adori Zahard and Zahard's Royal Guards are the only exception).[1] 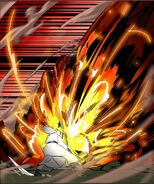